Plans to build new products will create 100 jobs in Belfast, Newtownabbey and Larne 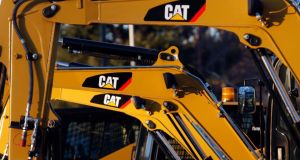 Caterpillar shed more than 750 jobs in Northern Ireland last year, but announced today that it has plans to build new products which will create 100 positions. Photograph: Jessica Rinaldi/Reuters

Manufacturing giant Caterpillar has announced a major £7 million (€8.2 million) investment at its factories in Northern Ireland.

The firm, which last year shed more than 750 jobs, has said it plans to build new products at its local plants.

Development of the yellow-coloured material-handling vehicles will start in the middle of next year, creating up to 100 jobs — some of which will be new roles, while others will involve re-training existing workers.

Invest Northern Ireland has contributed £1 million towards the development, while Northern Ireland’s Department of Employment and Learning has handed over £220,000 through its Assured Skills Programme.

The announcement was made as the first and deputy first ministers visited Caterpillar’s Chicago headquarters, where they met senior management.

He said: “This is an extremely positive investment of £7 milllion from one of Northern Ireland’s most established engineering firms.

“The project is especially important as it has the potential to help attract additional projects from the wider Caterpillar family. This new project for Northern Ireland will also offer our local workforce the opportunity to develop key transferable skills that will add value to our manufacturing sector, bringing further economic benefit.”

Deputy first minister Martin McGuinness said: “The 100 quality manufacturing positions required to run the operation will generate salaries in the region of £2.2 million annually, ensuring that existing employees and local people have an opportunity to progress high-value career development opportunities.”

It has plants in west Belfast, Newtownabbey and Larne.