Aston Martin gets in gear for stock market debut day 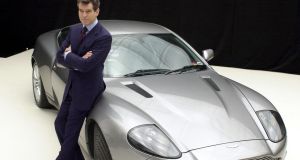 Pierce Brosnan as James Bond in 2002 next to an Aston Martin V12 Vanquish, as seen in Die Another Day. File photograph: PA Wire.

The price has been shaken – and stirred a little – but, assuming there are no last-minute hitches, shares in Aston Martin should make a splash when they start trading Wednesday.

James Bond’s favourite carmaker, which is selling 25 per cent of its shares, had initially hoped to command a price tag in the region of £5 billion. But City institutions baulked at the £17.50 to £22.50 target range and, on Monday, the top end was cut to £20 a share.

Word in the City yesterday as the books closed was that institutional investors were having to pay at least £19 to avoid the risk of losing out in the share allocation.

At the top of the new price range, Aston Martin would command a price tag of £4.5 billion, still a heady valuation for a firm that made less than £80 million last year – and that was its first profit since 2010.

The cachet of the Aston Martin name should attract some enthusiastic early morning onlookers at the London Stock Exchange’s headquarters in Paternoster Square, particularly as Aston Martin is bringing some of its classic models to the City to mark the occasion.

Chief executive Andy Palmer, who stands to collect £35 million from the float, is performing the opening ceremony at the exchange. And if the firm’s advisers have done their job properly, the shares should rise to a comfortable premium on debut day.

The share sale was restricted to institutional investors, employees and members of the Aston Martin owners club. Ordinary shareholders will get their chance to buy in the market next week – but will it be a good investment?

In the run-up to its flotation, the luxury carmaker brushed off any concerns over Brexit. Having “done a lot of thinking” about it, the company said it had concluded Britain’s impending exit from the European Union would have no material impact on its operations.

That’s a very different view from the rest of the automotive sector. As Aston Martin’s army of advisers were putting the finishing touches to the float figures on Tuesday, a raft of fresh warnings were filtering through from Paris, where leading industry executives were attending the city’s annual motor show.

They did not hold back on their Brexit fears. Toyota, for example, warned it would be forced to suspend car production in the UK in the event of a hard Brexit, with its European chief, Johan Van Zyl, saying the future of its plant in Derbyshire, which employs about 600, could ultimately be in doubt.

Rival BMW, which believes there’s a 50-50 chance of a hard Brexit, warned it might have to transfer production of the Mini from the UK to the Netherlands as a result.

And Jaguar Land Rover, Britain’s largest car manufacturer, revealed it was delaying a decision on whether to build electric cars in Britain until there’s some Brexit clarity. The company has already said it was moving more than 2,000 of its workers in the West Midlands to a three-day week until at least Christmas, citing uncertainty over Brexit and a slump in sales of diesel-powered vehicles.

However, it’s not the general public Aston Martin relies on for its sales, rather the global super-rich who won’t care much if Brexit pushes up prices. The average selling price of an Aston Martin is already almost £170,00 and its bespoke, top of the range models go for much, much more.

There was some good news for the luxury carmaker ahead of its market debut in the form of a disastrous profit warning from FTSE 100 constituent Royal Mail. The warning sent its shares plunging by more than 20 per cent, cutting its value to £3.6 billion.

That could put Aston Martin in pole position to nab Royal Mail’s place in the prestigious blue-chip index in the next reshuffle in December, which would make it the first car manufacturer in the FTSE 100 since Jaguar de-listed almost 30 years ago.

As for whether the shares are a good investment, the fact that the price had to be nudged downwards indicates caution from the City: after all, the firm has gone bust seven times in its 105-year history.

But iconic companies such Aston Martin are judged by different criteria than, say, widget manufacturers or metal bashers. As with football club shares, enthusiasts will always want to buy into the dream. And a share costing £20 or so is the nearest most of us will ever get to owning 007’s car of choice.

1 Should AIB compensate me for upsetting letter on arrears?
2 Chris Johns: The Johnson administration will spend, and needs a quiet Treasury
3 Poll on second election, concerns over Irish pension gap, and Ireland’s rich list
4 Clean energy’s dirty little secret on wind turbines
5 Tax shifts won’t drive multinationals out of Ireland - Moody’s
6 How to turn racists’ genetic arguments against them
7 Maeve Culloty: ‘My energy comes from the challenge’
8 Sinn Féin wants Irish unity, but do the economics make sense?
9 Will disabled brothers be homeless when Fair Deal loan falls due?
10 Brendan O’Connor is back in the RTÉ big league
Real news has value SUBSCRIBE