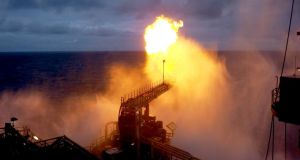 A drilling rig at the the Corrib gas field. An advanced tax agreement between Vermilion Energy Trust and the Luxembourg authorities was negotiated by PwC on behalf of the Canadian company in November 2009. Photograph: Shell E&P Ireland Ltd

The Canadian oil group that owns 18.5 per cent of the Corrib gas project made its investment using a complicated structure agreed with the Luxembourg tax authorities.

An advanced tax agreement between Vermilion Energy Trust and the Luxembourg authorities was negotiated by PwC on behalf of the Canadian company in November 2009.

The structure put in place for the investment uses what are called hybrid instruments, financial arrangements that have been targeted by the Organisation for Economic Co-operation and Development in its effort to reform the global tax regime.

A letter from the accountancy firm to tax official Marius Kohl said Vermilion intended that a Hungarian company would set up a branch in Luxembourg which would on-lend money to Vermilion Energy Ireland Ltd, a Cayman Islands company that is resident in Ireland.

As outlined in the document, the Luxembourg branch would be taxed in Luxembourg and would be allowed use “deemed” interest on loans that were actually interest-free, as a tax deductible expense.

The writing-off of deemed interest on interest-free loans received is a common feature of the tax affairs of Luxembourg companies established for intra-group financing, and is a controversial method of tax avoidance.

The proposed Vermilion structure, involving companies in Canada, France, Hungary, Luxembourg, Barbados, the Cayman Islands and Ireland, was accepted by Mr Kohl in so far as the taxation of the Luxembourg aspects of the scheme were concerned.

The PwC document said that in July 2009, Vermilion agreed to acquire a working interest in the Corrib field, 83km off the coast of Ireland, and that the Canadian company was expected to invest an additional amount of $300 million to $400 million “depending on the date when first commercial gas from the field is achieved”.

In order to facilitate intra-group financing, Vermilion was setting up a Hungarian company that would have a branch in Luxembourg, with an office, a desk, a telephone, fax number and one employee on its payroll.

The 2010 accounts for Vermilion Hungary Kft show it had assets of €186 million and made a pre-tax profit of €12.9 million. It had advanced loans of €178 million during the year to Vermilion Energy Ireland Ltd, for financing purposes. The Hungarian company paid tax of €12,583, with notes to the accounts stating the low level of tax paid in Hungary was largely to do with the fact that interest income of €2.7 million earned by the Luxembourg branch was exempt from Hungarian tax. It is not clear if the income was taxed in Luxembourg.

The 2010 accounts for Vermilion Energy Ireland, which is tax resident in Ireland, show it paid €13.9 million in interest to affiliated group companies, reducing the company’s taxable profits by that amount. The total owed to affiliated companies was €178 million.

The main operator of the Corrib project is Shell E&P Ireland, which has a 45 per cent stake.