In the past 13 months he has experienced the death of his father – the Citywest developer – alleged security scares, and court appearances 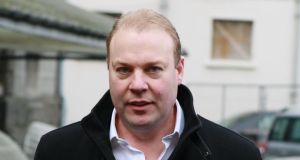 Jim Mansfield jnr, the 47-year-old son of the late Jim Mansfield snr, has had a difficult year. His father was the entrepreneur behind the Citywest Hotel, Weston Airport and other ventures that fell into financial trouble with the collapse of the Celtic Tiger.

Mansfield snr, who had at one stage estimated his wealth at €1.7 billion, died in 2014 after seeing his business empire collapse and having had most of his assets seized by Bank of Scotland (Ireland) and the National Asset Management Agency.

In the past week his son Jim jnr lost an appeal against a €6.3 million judgment order in favour of Allied Irish Banks, made against him and three others arising out of a failed property development venture in Co Meath.

The previous day, in Dublin District Court, a judge heard that the Garda was objecting to Jim Mansfield jnr’s legal attempt to have his driving licence restored. Mansfield jnr had brought an application to be allowed to drive again, having been previously put off the road.

Earlier this year Finnstown Castle Hotel, in Lucan, Co Dublin, where he works as a manager, and which formerly belonged to his family, was one of a number of premises raided by the Garda in a co-ordinated operation that was part of an investigation into money laundering. Apartments at the Citywest complex were also searched.

In October 2014 Mansfield jnr told the Irish Independent he was not worried about possible threats to his safety, saying it was news to him that the Garda, as the newspaper had reported, believed criminal elements wanted to see him dead. “Is my life in danger? I’d pay no heed. I haven’t done anything on anybody,” he said. A source close to Mansfield said this week that he believed there was never any threat against his life.

Last May a wedding party at Finnstown Castle Hotel was disrupted when a bomb was discovered in a car in the hotel car park. The security services believe it was linked to northern republicans and was being “stored” on the hotel grounds unbeknown to the hotel’s owners or management.

A man who answered the phone at the hotel this week said Mansfield would not wish to be interviewed for this profile.

Mansfield married relatively young and has since separated from his wife. During the Celtic Tiger years he featured regularly in social-diary pages. Mansfield has said he had an “on and off” relationship with the model Katy French, who collapsed and died in December 2007 while out socialising. She was found to have had a small amount of cocaine in her system. Mansfield said he was devastated by her death.

Despite his prominence on the social scene he was also increasingly active during the later Celtic Tiger years in running the business empire his father had built. This was despite the fact that Jim jnr left school early and had difficulty reading.

Not that a limited education had stopped his father. Mansfield snr was one of three children brought up by their mother on a farm in Brittas, in south Dublin. Mansfield snr left school at 14 and over time developed his own haulage business.

He married a local woman, Anne, and they had three children: Tony, Jim and PJ. Mansfield snr’s work with trucks led to a love of machinery, and he made his first fortune buying unwanted heavy machinery from the British government after the Falklands War, and shipping it from the South Atlantic islands to the US and the UK, where it was sold at a substantial profit.

The money was used to buy land in Saggart, Co Dublin, just as the Irish property boom was about to get under way, and where he developed the enormous Citywest complex. Mansfield snr had brushes with the authorities over unauthorised developments at Citywest and Weston Airport, yet the Citywest Hotel was a favoured location for Fianna Fáil events, such as its annual dinner, during the Bertie Ahern years.

Mansfield continued to be involved in the heavy-equipment business, and his oldest son, Tony, in time took on a lot of the responsibilities in that area. Jim Mansfield jnr became heavily involved in running the other areas of what was often called the Mansfield Group, such as the Citywest complex, the airport, and a planned convention centre.

Mansfield snr suffered from multiple-system atrophy, a rare degenerative condition that causes symptoms similar to Parkinson’s disease, and he was content to let Jim jnr take on a greater role in the family’s operations.

“Jimmy was the white-haired boy, and as the years passed he took on a very strong role in the business,” said one source. “He became more and more powerful. PJ’s role was more as an assistant to Jimmy.”

A snapshot of father and son working together was contained in an affidavit Mansfield snr swore as part of an unsuccessful attempt to prevent Bank of Scotland getting an order for €214 million against him in 2011. He said that in August 2008 he and his son had gone to the Bank of Scotland (Ireland) offices on St Stephen’s Green, in Dublin, to talk to senior management about the funding of a convention centre.

“We proceeded to meet the management team, as arranged, and [the bank’s then chief executive, Mark Duffy] attended the meeting from its beginning.” They discussed a loan of up to €20 million to build the centre. “Mr Duffy stated that this would not be a problem.”

But this picture of a hugely wealthy father-and-son duo negotiating multimillion loans directly with the chief executive of a major bank has to sit alongside the evidence submitted to Mr Justice Peter Kelly in 2010, when Mansfield jnr was objecting to a judgment order being given to AIB.

Mansfield jnr, the court was told, had been a poor student when attending the national school at Rathcoole and was often absent. The same was true at secondary school in Naas, and he left after two years.

A report from an educational psychologist submitted to the court said that Mansfield had had a very severe reading difficulty but was at least average when it came to nonverbal reasoning. The report was submitted in support of Mansfield’s argument that he should not be bound by documents he had signed for AIB governing a joint-and-several loan.

But Mr Justice Kelly noted that, despite his alleged reading disability, Mansfield was a director of 25 companies involved in animal husbandry, the repair of motor vehicles, financial intermediation, real estate and the management activity of holding companies. Two of the companies were registered in the Isle of Man.

The judge noted that these were all family companies and that this suggested the family had considerable trust in Mansfield jnr’s ability to understand and participate in their management.

In the end the judge ruled that because Mansfield jnr, despite his experience in business, had not taken steps to ensure he understood the AIB documents, he could not claim that he did not understand what he was doing. The Court of Appeal this week upheld that view.

That Mansfield jnr did not seek advice before signing the AIB documents during the 2000s would appear to fit with a pattern described by one source, who says Mansfield jnr was a “seat of the pants operator” who was slow to seek advice from professionals.

The economic backdrop to the two men’s careers could not have been more different, but the approach that allowed Mansfield snr to build a valuable property and business empire, before losing it all, appears not to have served Mansfield jnr so well.