Speakers discuss ‘unconcious bias’ against women during festival in Dublin 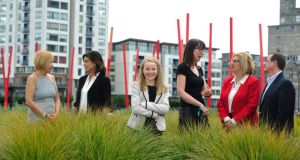 The problems young women face entering the tech world and the “unconscious bias” in industry were the main topics discussed at Thursday’s Inspirefest conference, which runs until Saturday at the Bord Gáis Energy Theatre and Merrion Square park.

A variety of national and international speakers from both government and industry took to the stage to share stories of success, as well as discuss the modern challenges that women face in science and technology.

Issues debated included how society views technology, the unconscious gender bias seen in industry, and the “imposter syndrome” felt among professional women, whereby many do not feel they deserve the position achieved.

One major theme in the conference was the poor confidence of young women entering the industries.

“There still seems to be a lack of social encouragement and self-perception in young women,” said Fionnuala Meehan, sales director for Google in Europe, the Middle East and Africa.

During a group discussion, she highlighted the fact that during a mixed-gender coding competition last year only one girl – out of 1,500 girls who took part – advanced to a further round.

“Were they able? Yes they were. Did they have the confidence? No they didn’t.”

Such problems extend to professional lives as well.

“There is an unconscious bias we need to address,” said Prof Mark Ferguson, Director General of Science Foundation Ireland.

One example given was the need to “redress the balance” in research, such as helping the careers of women researchers after having a child.

DCU President Prof Brian MacCraith, who has been involved in research into gender equality for several years, feels that a “coalition” of factors is needed to see any true progress “so we’re not coming back here in one year with another kind of problem. It has to be persistent, it has to be comprehensive, it has to be systematic.”