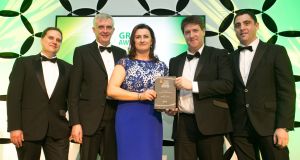 Global biopharmaceutical company AbbVie has set quite challenging environmental and sustainability targets for itself and its Irish operations are making a significant contribution towards meeting them.

In 2016, the company established emissions, water and waste reductions targets to be met by 2025. Measured against a 2015 baseline, these will see total CO2 equivalent (CO2e) emissions reduced by 25 per cent and the amount of electricity purchased from renewable sources reach 50 per cent. Total water usage will be cut by 20 per cent while total hazardous and non-hazardous waste generated will be reduced by 20 per cent and a recycling rate of 50 per cent for hazardous and non-hazardous waste combined (excluding construction and demolition waste) will be achieved.

By 2035, CO2e emissions will have been reduced by 50 per cent; 100 per cent of electric energy will come from renewable resources; water usage will be cut by 50 per cent; and there will be zero waste to landfill at all AbbVie sites.

Progress to date has been good. “In 2017, we reduced total carbon emissions by 13 per cent as compared to our 2015 baseline and increased purchasing from renewable energy sources by 16 per cent,” said Michael Tuohy, AbbVie Cork’s environmental health and safety manager for global manufacturing operations. “We also reduced absolute total waste by 7 per cent, maintained our recycling rate of 37 per cent and reduced absolute water consumption by 8 per cent.”

This performance saw AbbVie receive the gold-class distinction from sustainable investment specialist RobecoSAM in both 2017 and 2018 for excellent performance in social, economic and environmental practices. The company also maintained its position as biotech industry leader in the 2017 Dow Jones sustainability index.

“Teams from AbbVie’s five sites across Ireland work closely together on energy efficiency projects and improvement initiatives in order to deliver energy savings and socioeconomic benefits. This collaborative effort delivers a common approach to managing energy and recognises best-practice projects with a view to replicability,” said Tuohy.

“All three of our manufacturing sites are extremely sensitive to the local environment, flora and fauna. In the last three years we have worked on a number of projects to try to streamline the waste generated on site by improving segregation and by increasing the amount of waste sent for recycling. Since 2016, all of the AbbVie sites in Ireland source their electricity from renewable sources.”

The AbbVie site in Ballytivnan, Co Sligo, has undertaken an ambitious programme to transform the original 1970s facility into a highly energy-efficient centre for medical device manufacturing. As a result, AbbVie Ballytivnan was a finalist at the prestigious Sustainable Energy Authority of Ireland sustainable energy awards.

One noteworthy initiative at Ballytivnan was the water-optimisation project which saw the creation of a 120m deep well, a water treatment system and a reliable water distribution network which has saved almost 180 million litres of water and delivered savings of about €100,000 annually.

The company’s plant in Carrigtwohill, on the outskirts of Cork, has embarked on a number of multi-year initiatives including an award-winning biomass boiler project, a major energy-saving project and a waste recovery project.

The facility at Manorhamilton Road in Sligo replaced kerosene with LPG as the fuel for generation of steam and hot water, delivering a significant CO2 reduction and cost savings in the process. Existing lighting has been replaced with LED, achieving a 50 per cent reduction in lighting energy demand. In addition, a heat-recovery project sees waste heat from previously emitted to atmosphere returned to provide heating for the site.

These projects and initiatives have seen AbbVie win a number of prestigious awards in this country. These include the responsible care award at the Irish Pharma Industry Awards; and the green pharmaceutical award at the annual Green Awards, which recognise and showcase organisations that make an extraordinary contribution to a greener future in Ireland.

Overall, AbbVie has invested about €6 million in sustainable and renewable energy programmes in Ireland since 2013. “Through the company’s environment, health-and-safety programmes and policies, AbbVie works hard to ensure that each of our facilities, including those in Ireland, operates responsibly and works to deliver products that improve people’s lives while protecting human health, safety and environment,” Tuohy said.