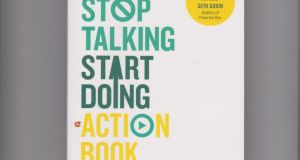 The central theme of this book is about how so many individuals sabotage their dreams and what we can do to prevent this happening. While entrepreneurship is never far from the author’s mind, the principles outlined in this book can be applied across wide areas of life.

Author Shaa Wasmund is a digital entrepreneur, trainer and speaker who has worked with James Dyson and Bob Geldof among others. She now runs boot-camps and coaching programmes using her shaa.com brand.

The clock is ticking and life is shorter than we expect so the most important thing to do is to start to take control of your destiny, she says. Starting something is probably easier than at any time in history. Our connected world makes it possible to actualise dreams, ideas and initiatives in ways our forebears couldn’t even imagine.

Once you start to do something, the unconscious mind won’t forget about it until you have completed it, a process known as the Zeigarnik effect. This is named after a psychologist called Bluma Zeigarnik who could take complicated orders from a large group of students and remember them perfectly without writing them down. However, as soon as the bill had been paid, their memories of what had been ordered fell apart, as if the order had been placed in a mental trash can.

Zeigarnik’s conclusion was that once a project had been set in motion, the subconscious keeps track of it to ensure that it is completed.

Whatever it is you want to do, there are people who share your passion so it’s important to ‘tribe up’ as the author puts it. Practical suggestions include using meetup.com, an online networking site that facilitates offline meetings in various localities around the world and peoplehunt, an app that connects people with reciprocal interests.

Wasmund notes that rapid prototyping is a model that is increasingly used to get traction with products. The uncertainty of outcome is one of the reasons many people get paralyzed with fear at the thought of moving from the talking state to the doing state. But it doesn’t matter whether you move from A to Z in one move.

As she notes, history is littered with accidental discoveries that are certainly not failures. In 1968, for example, the scientist Dr Spencer Silver at 3M figured that he had discovered something of little worth until one of his colleagues told him that he found the ‘low tack’ adhesive he had developed to be particularly useful for bookmarking his Bible. The Post-It note was thus born.

Immersing ourselves in projects involves getting into a “state of flow” where you are so absorbed in what you are doing that you don’t even notice the passage of time, how tired you are or the fact that you are hungry. Flow involves optimal challenge when you are using higher than average skills to do something which is more difficult than average.

Research by the author Mihaly Csikszentmihalyi finds that flow is experienced by 15-20 per cent of people every day while 15 per cent of people say that they never experience it. Its components include clear goals, the match of above-average challenges with above-average skills, personal control involving a direct influence on the outcome of the activity and a high degree of concentration.

There is some interesting analysis too on the difference between so-called “maximisers” and “satisfiers”, the former who strive for only the best and the latter happy to settle for a “good enough” solution to any challenge.

Researchers have found that when looking for jobs, maximisers applied for more positions than satisfiers, fantasised about other jobs after receiving job offers and had starting salaries that were on average 20 per cent higher than satisfiers. Despite doing better financially, they felt more “pessimistic, stressed, worried, overwhelmed and depressed”. The researchers concluded that the search for a best solution is a route to guaranteed disappointment.

The book concludes with a five-point practical action plan which includes making a public commitment to your goal by telling friends and family, breaking the challenge down into bite-sized pieces, celebrating milestones along the journey, writing a record to make the process real and finally reminding yourself of the reasons why you are working on your dream.

Simple, highly accessible and well-illustrated, this book should be useful to anyone embarking on a challenging journey.