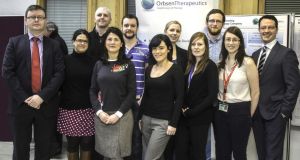 The Orbsen Therapeutics team: the next steps for the company are to continue to raise small amounts of domestic private equity and funding to finance operational costs as it moves towards completion of early stage clinical trials

Breakthroughs in stem cell research tend to be announced with quite some fanfare but this was very deliberately not the case with Orbsen Therapeutics.

The Galway-based company, which was founded by Prof Frank Barry and Prof Tom O’Brien, has developed a novel method for isolating mesenchymal stem cells (MSC) from a number of adult tissue sources for use in human therapy but little has been heard of it until now.

“We have deliberately stayed under the radar until now,” says chief executive Brian Molloy. “The history of stem cell research is one of over-promising and then not delivering. We decided that we should prove what we had first. We are now at that stage and we are seeking to raise our profile.”

The company has overcome one of the most significant challenges facing the developers of stem cell therapies – the purity of the cells being administered to the patient.

The majority of developers use a 40-year-old method to harvest and purify the MSC.

This involves harvesting cells and growing them on a culture and washing the non-MSC cells away. The MSC cells are then grown in isolation.

This method generally results in just one in 50,000 cells harvested from a patient being therapeutically active MSC. To put this in context, 150 million cells are required for a therapeutic dose.

Marker protein
Orbsen has identified a marker protein, known as CD362, that resides on the surface of the native MSC. Using antibodies that specifically bind CD362, MSC can be identified and extracted from human tissue to a level unmatched in the industry at present.

The Orbsen innovative technique can purify MSC from tissue at ratios as high as one cell in four. “This represents the highest levels of MSC purity reported in the world to date and we continue to optimise our processes in order to attain 100 per cent purity,” Molloy notes.

The commercial potential of the technology has been recognised by the EU Framework 7 (EU FP7) research programme and since the discovery of CD362, Orbsen has successfully competed for and been awarded four collaborative FP7 grants totalling more than €20 million to fund and develop the CD362 MSC therapy for clinical use. The programmes cover research into therapies for a variety of conditions including complications associated with late stage diabetes, inflammatory liver disease, and solid organ transplants.

Separate funding has also been won for research into rheumatoid arthritis.

The next steps for the company are to continue to raise small amounts of domestic private equity and funding to finance operational costs as it moves towards completion of early stage clinical trials.

“The path from research to revenue generation in the biotech area is extraordinarily long,” says Molloy.

“It might be 2025 or 2026 before we have a product on the shelf and until then we are going to stay lean while we continue to carry out trials.”