IBRC liquidators have spare cash of €1.85 billion after asset sale

State will recoup €1.1bn it is owed due to money paid to depositors under state guarantee 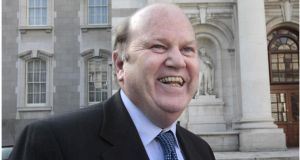 Minister for Finance Michael Noonan welcomed the report and said it was a good result for the taxpayer. Photo: Brenda Fitzsimons/The Irish Times

The massive sell off of IBRC assets with a book value of €21.7 billion has generated €16.5 billion in cash, according to an update published on Friday by the joint liquidators, Kieran Wallace and Eamonn Richardson of KPMG.

This has allowed €14.7 billion to be paid to secured creditors – mainly NAMA– and to meet the costs of liquidation. Assets with a book value of €3.6 billion remain to be sold.

The cash balance of €1.85 billion is available to distribute to unsecured creditors, once the liquidators are happy that they will retain enough to meet any future legal claims.

The exact total of unsecured creditors has still to be established, as all creditors have to make their claims to the liquidators by the end of this month and these then have to be verified. However the total is likely to be in the €1.5 billion to €1.6 billion region, meaning all the main group of unsecured creditors will be paid in full, including the State. Minister for Finance Michael Noonan welcomed the report and said it was a good result for the taxpayer.

After the main group of unsecured creditors are paid in full , the next group due to be paid are the former Anglo junior bondholders, a group who held out against a government buy-out offer.

Paying these bondholders would prove highly controversial, given the massive losses at Anglo. However because the liquidators have to ensure they have enough funds to meet any legal claims from ongoing litigation, no payment is likely to bondholders for quite some time.

The joint liquidators have indicated that they may be in a position to make an interim payment to the main group of unsecured creditors before the end of this year. However no indication was given in the report about the likely scale of this interim payment.