How the Irish helped weave the web

Back in the day, most websites were based in academic institutions or university departments 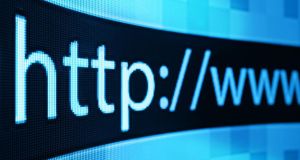 If you need information, the world wide web has it, offering trillions of pages available from millions of websites that turns the globe into a single mega network. Yet it was not always so.

Once upon a time, the number of sites providing hypertext over the internet stood at 100.

Most of the sites were based in academic institutions or university departments. There was very little there to attract an ordinary user looking for something, let alone attempting to “surf” what little was there.

Ireland had a surprisingly early involvement in the world wide web and can count at least three Irish sites that land in the elite first 100.

Two were academic sites but the third was one of the very first run by a commercial company hoping to find a more innovative way to attract and service customers.

Then one lucky summer, a Trinity student ended up working for three months at Cern, the European nuclear research centre. He occupied an office two doors down from Tim Berners-Lee, the man who proposed the world wide web (www) back in 1989.

One of the earliest sites was opened up in 1990 at University College Cork by Peter Flynn.

He was acting head of computing there in the years before the web but in that year moved back into research computing. This in turn brought him into contact with Berners-Lee.

“I was the Irish representative on working group three of an organisation known as RARE, the Association of European Research Networks,” says Flynn.

“They were hired by the EC and DG 13 to develop proposals to establish a research network, a way to connect the universities together. It was to have been the equivalent of the internet. Tim was the rep from Cern and we used to meet, 20 or so of us from around Europe, a kind of think-tank,” he says.

Hypertext project
They were at a RARE meeting in Zurich in 1990 when Berners-Lee demonstrated his new hypertext project. (Hypertext is text on a computer screen that connects or hyperlinks instantly to other related hypertext documents, what makes the web work.)

“We were at the meeting and on the side Tim said, ‘have you seen this latest thing I am working on?’ He showed us what he was doing, developing a way to allow physicists to share their lab research with one another.”

It meant a report could be read on any work station without formating problems. “It allowed you to bring it up on the screen and read it. Tim said it was this thing http and ‘if you want to try it, here is the address’.”

Berners-Lee offered it as open source so anyone could have it and Flynn had an immediate use for it. He was working on the digitised text project CELT, run by the Royal Irish Academy and UCC.

“CELT was just getting off the ground and we were asking how we could make this work. It happened to come up at the same time Tim had his http transfer in html. I downloaded the software from Tim’s computer and lo and behold, it worked. That was Ireland’s first web server at this stage, the first website in Ireland and the ninth in the world,” he says.

Those were the very earliest days and most of the people involved were academics developing systems for academics. “It was not apparent at that stage it would take off like it did,” says Flynn. “To have internet you needed to be a university or very large company or in the US, the government or defence department.”

It started to open up in 1993, however, as companies set up servers and began to provide internet services to the public.

“It was all very good fun,” Flynn says. The server installed to support the CELT site ran without incident from 1990 through to 2011 but then suffered a major disc problem. That original web server is sitting on my floor. We are going to try and resuscitate it by disc recovery,” Flynn says.

Justin Mason, a software engineer at Swrve Ireland, was also an early participant in the world wide web. He was working for Iona Technologies at the time and was aware of the web, but back in 1993 it was awkward to use unless you were a tech expert.

Then the Mosaic web browser was released. “It was a massive improvement on what had gone before. There was also the fact that it was free and downloadable and easy to view,” Mason says.

“I jumped on that as a great idea and was able to convince the people in Iona that this was a great way to market the company. Most of our customers were in the US.” It looked like something that would allow them to serve these customers via the world wide web.

“I was their system admin,” Mason adds. “That meant I had a load of access to high powered computer systems. I started to develop ways to allow people to get access to information about our staff and services.”

It went live as a website in June 1993, the second for Ireland and the 70th site worldwide, he says. “We weren’t selling the web technologies, we were using it as a way for people to see what Iona was doing. A load of people about that time had the same feeling, this was an amazing new form of communications and it could benefit society. It really felt as if a new frontier was being opened.”

Mason went on to make a name for himself, writing the anti-spam software SpamAssassin. It became the core of most spam blocking software and is currently used by 100 million users worldwide. He, of course, offered it as open source.

“Part of the inspiration for that and writing open source software came from Tim Berners-Lee and the fact he released the web software free.”

James Casey was an undergraduate mathematics student at Trinity College Dublin during the early 1990s. The department had very advanced facilities and he was “playing around” with an early browser called Gopher. Then Justin Mason, who knew him, “pointed me at the web”.

He and Matt Davey then set up Ireland’s third site in the maths department, about the 100th site to be opened internationally. Casey was also encouraged to sign up for a three-month placement at Cern during the summer of 1993. He was installed in an office two doors down from Berners- Lee and “sucked up the spirit of the web”, says Casey who is now software engineering manager at Portland-Oregon based start-up CHEF. “I worked in a small team with Tim. There was definitely a sense this thing was exploding quickly. It is funny when you look back and saw how fast it grew,” he says.

Joining CERN
Casey is a strong supporter of the campaign to get Ireland to join Cern and firmly believes that without Cern, the world wide web might not have had the impact it has. It would have been bound up in patents if it had been started by a company but was given away free of charge by Berners-Lee and Cern. “This is what Cern did, provide open access. Cern was a natural place for this to happen and I always wondered if it hadn’t been at Cern would it have grown so quickly.”

The creation of the largest communications network yet seen was also the work of youths. “The team that wrote the software was incredibly young,” Casey says. “They were all under 30, tech students, PhD students. Tim had this amazing ability to harness the energy of these people and give them a direction. He was able to get great collaboration out of people.”