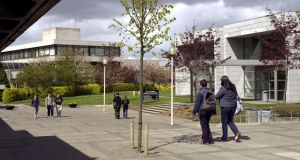 UCD claims it had concluded an agreement with Applied Process Company and the two shareholders. Photograph: Matt Kavanagh

A dispute over whether University College Dublin (UCD) is entitled to a 15 per cent shareholding in a fast-growing company involved in developing commercial processes for global pharmaceutical giants has come before the Commercial Court.

Applied Process Company (APC) Ltd, set up in 2011, now employs more than 100 people, and expects to double its workforce in the next five years. It is set to achieve revenues of almost €18 million by the end of this year, it was stated in court documents.

Its primary business is the development of processes enabling pharmaceutical companies to speed up the commercial development of lifesaving medical advances.

UCD claims it had concluded an agreement with the company and the two shareholders. In return for UCD getting a 15 per cent shareholding, APC would be established and/or approved as a “campus” company and would be permitted to participate in the Nova UCD Campus Company development programme.

APC and the two shareholders dispute this, and say APC was not a campus company as it was not set up to commercialise the intellectual property of UCD. They also say, given the affiliation both men have had with UCD, and the “affection” they have for it, APC has been willing to make “very generous” contributions to the university, most recently offering to support it by some €1 million over five years.

When the proceedings came before the Commercial Court on Monday, Rossa Fanning SC, for APC and the two shareholders, said his side wanted them fast-tracked and UCD was not objecting to that.

When the judge suggested the case appeared suitable for mediation, counsel said his side would want to see a detailed statement of claim before considering whether mediation was appropriate.

He said APC had been incorporated in 2011, but this claim had only issued almost six years later. There was no executed agreement between UCD and the defendants, and UCD’s claim was “baseless and opportunistic” and arose because of the company’s success.

Counsel for UCD denied delay, and said its position had been set out in detail for some time.

Mr Justice McGovern agreed to fast-track the proceedings, directed UCD to deliver its statement of claim next week, and returned the matter to later this month for further directions.