State risks missing out on huge savings from generic drugs 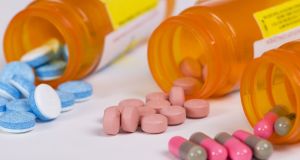 Medicine costs: a significant portion of the €750 million in savings expected under a drug pricing deal between now and mid-2020 may not be delivered. Photograph: Getty

The Government risks losing out on hundreds of millions of euro in savings on its drug bill because of the failure to buy generic alternatives to expensive branded drugs.

The drug pricing agreement signed last year provided that companies would cut the price of their new generation branded biologic drugs by 30 per cent when a generic competitor, or biosimilar, entered the market.

Pfizer’s rheumatoid arthritis blockbuster Enbrel was the first to face the challenge when Biogen brought its biosimilar Benepali into the Irish market. However, in the first two months under the new competitive regime, just three packets of Benepali were sold compared to almost 10,000 of the branded Enbrel.

Industry sources say the failure of Benepali to secure any market share will only deter other generic competitors from entering the Irish market.

If that happens, the branded drugs will not have to cut their prices by the agreed 30 per cent and a large portion of the €750 million in savings expected under the drug pricing deal between now and mid-2020 will not be delivered.

The new figures have emerged as the Government struggles to find a way to pay for Orkambi, a breakthrough medication for cystic fibrosis.

Access to the market for new, innovative drugs was a key driver for the Irish Pharmaceutical Healthcare Association, which represents the major companies in the sector, to sign up to the accord and to the reduced prices for older drugs.

A conference in Dublin on Wednesday organised by the Healthcare Enterprise Alliance, which represents the generics industry, will hear that a lack of real competition in the Irish medicines market is forcing Irish patients – and the State – to spend more on expensive drugs needlessly.

“If companies are going to invest in the cost of marketing and selling biosimilars at a discount below established drugs, you would want to be sure that you are getting a reasonable share in the market,” said one industry source. “If you are selling just three packs in four months, what does that say to the industry.”

Benepali is one of just two biosimilars to enter the Irish market in the past year. The other, a diabetic drug called Abasaglar, sells fewer than 20 packets a month. The branded medicine with which it is competing, Lantus, is selling well over 10,000 a month.