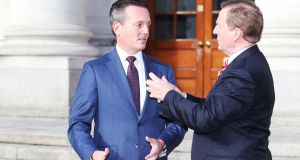 Allergan chairman, chief executive and president Brent Saunders in Dublin with An Taoiseach Enda Kenny Wednesday where he confirmed an investment of €42 million in its Irish operations and details of a new €50,000 Innovation Award Programme with Irish colleges around the country. Allergan also announced that it will become the official sponsor of the Dubai Duty Free Irish Open as part of a three-year sponsorship. Photograph: Leon Farrell/Photocall Ireland.

Dublin-headquartered pharma company Allergan is to invest €42 million in its Irish operations this year.

The company, which employs approximately 1,700 people in the Republic, has also announced details of a new €50,000 innovation award programme with Irish colleges around the country.

In addition, the company said it will become the official sponsor of the Dubai Duty Free Irish Open hosted by the Rory Foundation as part of a three-year deal.

The announcements coincide with the Allergan global leadership team meeting in Dublin.

Allergan operates three facilities in Ireland. These include manufacturing operations at Clonshaugh, Dublin, and Westport, Co Mayo, as well as an international supply chain office in Earlsfort Terrace, Dublin.

The Westport and Clonshaugh facilities develop and manufacture a range of branded medicines primarily for the export market.

This year’s investment of €42 million across its Clonshaugh and Westport manufacturing operations will support increased manufacturing capabilities for some of Allergan’s key current and future products.

The investment in Westport will go towards adding additional capacity to its eye care manufacturing operations and the expansion of its ocular implant manufacturing facility.

Speaking at the announcement, Taoiseach Enda Kenny said he had seen first-hand the impact the company has had in his native Mayo.

“Four decades ago, Allergan had the confidence and foresight to invest in Ireland, developing their first facility at Westport, Co Mayo, and a second facility in 1992 at Clonshaugh in north Dublin,” he said.

“I have seen first-hand the growth of the company in Mayo from roughly 25 jobs in 1977, and how they became an integral part of the community, which has since expanded to over 1,100 jobs in Westport.

“Allergan were amongst the early arrivals to Ireland and helped to sow the seeds of what was then our emerging pharmaceutical sector, which thankfully took root with much vigour over the intervening years.

“Allergan has undoubtedly made a significant contribution to making Ireland home to a world-class pharmaceutical industry and I wish to thank them for their ongoing commitment to their Irish operations.”

Allergan’s chief executive Brent Saunders said the Republic “continues to be a cornerstone” of the company’s growth.

“Our success has been built on strong teams globally, including our highly talented team we have here in Ireland, operating at state-of-the-art manufacturing facilities, producing pharmaceutical products for the global market,” he said.

“We are excited to announce continued investment in our Ireland operations, which will help Allergan continue to provide patients in Ireland and around the world with our innovative medicines.”

Allergan has commercial operations in approximately 100 countries, and employs more than 16,000 people worldwide.

The company has orchestrated a flurry of deals since its $160 billion merger with Pfizer collapsed in April.