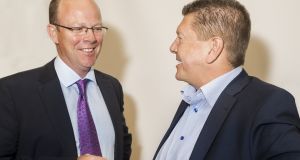 Irish medical software group Oneview Healthcare has landed a prestigious contract with a major US hospital group. The company, which is listed on the Australian stock exchange, conducted a pilot study at the group’s St Louis Children’s Hospital last year.

Now Barnes Jewish Healthcare (BJC), which is one of the largest non-profit hospital groups in the United States, has decided to deploy Oneview’s software solution at its new Barnes Jewish Hospital Tower and St Louis Children’s Hospital.

The US group will install 2,000 Oneview devices at its hospitals over the next three years. starting with the new 274-bed Barnes Jewish Hospital Tower in Missouri, which is due to open in August.

It is a significant contract award for the group, founded by Dubliner Mark McCloskey.

Oneview’s “patient engagement solution” allows medical staff and patients to work off one terminal for everything from consultations and education about conditions and therapy to ordering meals and watching television. This will allowing hospitals to improve patient engagement, clinical workflows and communication.

“It’s been a privilege working with such a prestigious organisation as BJC,” said Oneview chief executive James Fitter. “As one of the United States’s leading healthcare systems, BJC is demonstrating their commitment to not only improving the patient experience but also the experience of their staff with the deployment of Oneview. We look forward to a long and productive relationship, including helping them achieve quantifiable improvements in outcomes, satisfaction and cost savings.”

Oneview announced in September that it planned to hire 100 new staff on the back of a series of contract awards in the US, Australia and the Middle East. It has been aggressively targeting the US market with its technology and has run a series of “proof of concept” trials at a number of hospital groups.

Oneview won the Frost and Sullivan Global Technology Innovation Award last year, with the judges citing its ability to “seamlessly integrate hospital technologies on one scalable platform” and its “exceptional” financial performance as contributing factors.