Cantillon: Pfizer/Allergan deal the biggest of any sort yet attempted in pharma/medtech sector 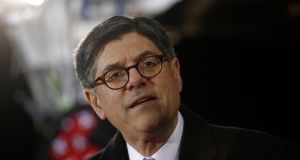 Jack Lew: The latest efforts by the US treasury secretary to clamp down on inversions are irrelevant for the Pfizer deal, which meets previous thresholds laid down by his department for inversions. Photograph: Simon Dawson/Bloomberg

The spluttering from Washington can be heard clearly across the Atlantic. The trouble is that the more it squares up on inversions, the more the United States highlights how it is pretty powerless to effectively end the practice.

That the Pfizer approach to Allergan should be the catalyst for the latest round of agonising over the practice, which sees American companies effectively move their tax domicile to jurisdictions with lower corporate tax rates, is no surprise.

A Pfizer/Allergan deal in the region of $150 billion is not only the largest corporate inversion to date, it’s the biggest deal of any sort yet attempted in what is a pharma/medtech sector, where consolidation in pursuit of new drugs and lower costs has been the pattern of recent years.

And the United States cannot even say it wasn’t warned. Pfizer had tried previously to shift domicile in an ultimately futile pursuit of British rival AstraZeneca

In the wake of that move, Pfizer chief executive Ian Read warned that he had a responsibility to work to defend the value of his company, which, he said, was being forced to compete against foreign rivals “with one hand tied behind our back” due to the corporate tax regime in the US.

As it stands, Pfizer has an effective tax rate of 25 per cent, compared to the 15 per cent or less being paid by Allergan.

And in an interview with the Wall Street Journal after news of the Allergan approach broke, he said he had actively tried to encourage a change in tax policy in Washington to give companies less cause to look at moving elsewhere, but had been “totally unsuccessful”.

US treasury secretary Jack Lew’s latest efforts to clamp down on inversions are irrelevant for the Pfizer deal, which meets previous thresholds laid down by Lew’s department for inversions – that at least 40 per cent of shares in the merged group be owned by the “foreign” party.

And Lew has repeatedly made clear that a comprehensive assault on inversions is a matter for US Congress. Divisions there remain as sharp as ever with both sides bemoaning the practice but showing no inclination to muster sufficient support to counter it.