Pfizer $150bn takeover of Allergan looks set to be sealed 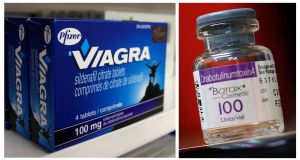 Pfizer and Allergan were racing to put the finishing touches to the biggest healthcare deal in history on Sunday afternoon, as the pair prepare to unveil a $150bn transaction that would create the world’s top drugmaker and renewing focus on Ireland’s role in so-called ‘tax inversion’.

A deal, structured as a tax inversion, would see Pfizer move its tax base to Ireland where Allergan is based, allowing the company to avoid US tax bills on more than $128 billion of profits earned overseas.

Pfizer is gearing up for battle with US legislators in Washington over concerns that the deal would deprive the US Treasury of billions of tax dollars, put thousands of jobs at risk and erode the country’s ­science base.

The Obama administration is preparing to unveil measures to deter US companies from using take-overs to relocate their domicile to low-tax jurisdictions.

The administration’s tax measures are expected to focus on diluting the benefits that inverted companies gain from making loans among subsidiaries. The Treasury made it harder last year for inverters to access offshore earnings, which scuppered AbbVie’s planned £32 billion takeover of Dublin-based Shire.

Pfizer has assembled a team of advisers with political connections including Eric Cantor, the Republican former House majority leader who is working at boutique advisory firm Moelis. He is adv­ising Pfizer on how to overcome fears that the deal would lead to lay-offs and cuts in research and development, two of the people said, though he will not lobby politicians directly.

Brent Saunders, Allergan chief executive, has said large pharma companies should focus their resources on developing and marketing drugs, leaving drug discovery to nimble biotech companies. His words have stoked fears for their jobs among some Pfizer scientists.

The effective takeover by Pfizer, maker of Viagra, with Allergan, the maker of Botox, is believed to involve it paying with 11.3 of its shares for each Allergan share. There will also be a small cash component, accounting for less than 10 per cent of the value of the deal.

While the transaction will technically be structured as Allergan buying Pfizer, the latter’s chief executive, Ian Read, will be CEO of the combined company, with Allergan CEO Brent Saunders serving as his deputy in an operational role. It will be the biggest merger of the year, topping beer maker Anheuser-Busch InBev’s proposed $107 billion takeover of SABMiller Plc.