How AbbVie wooed Shire with its inversion scheme 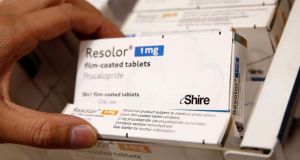 Susan Kilsby had not been chairwoman of the drugmaker Shire for even a week when she received an office call that would set off a frenzied trans-Atlantic courtship.

On the line was Richard Gonzalez, chief executive of the drugmaker AbbVie, based in Chicago.

Gonzalez said there was an “important corporate matter” he wanted to discuss.

As the former head of Credit Suisse’s European mergers and acquisitions practice, Kilsby had spent her career around deals and knew what that was code for: A takeover approach was brewing.

She also knew she had to proceed carefully. Just weeks before AstraZeneca, the giant British drugmaker, had watched a $119 billion offer from Pfizer evaporate in the face of missteps and bluster from both sides.

While Kilsby was not going to sell Shire cheaply, she did not want a valuable opportunity to slip away, either.

She agreed to meet Gonzalez in Geneva the next week, and in a private 90-minute meeting, he offered to acquire Shire for 39.50 pounds a share, a total of about $40 billion.

A week later, Shire’s board notified AbbVie that it was not interested. How AbbVie came to win Shire demonstrates that even in the middle of a new boom in mergers and acquisitions, a hefty premium is no guarantee of success.

Had AbbVie pushed too hard, had Shire been entrenched or had investors been too passive, the deal might never have happened.

Even Pfizer, experienced in striking megadeals, could not win over AstraZeneca with a big offer alone.

But AbbVie, with its advisers at JPMorgan Chase, performed a high-wire act, balancing cross-border regulations, a short time frame and international shareholders.

AbbVie signed on JPMorgan both as its exclusive adviser and the provider of its entire bridge loan to finance the deal. At $23 billion, the bridge loan would be the largest ever done by a single bank, and was personally approved by JPMorgan’s chief, Jamie Dimon.

AbbVie found lessons in Pfizer’s missteps. Gonzalez and his advisers at JPMorgan decided that instead of simply stating the most recent bid, it would announce the series of bids. That would demonstrate that AbbVie had already increased its offer substantially, and reduce the risk of Shire’s stock running up too much further.

AbbVie also decided not to disparage Shire’s performance, or accuse its management team of ineptitude. Instead, in going public in late June at the same price as its third offer, AbbVie lauded Shire’s progress and emphasized the merits of a combination.

By mid-July, AbbVie secured an agreement from Shire. On July 14, a Monday, Shire said it would recommend a deal worth 53.20 pounds per share, or $54 billion. One final sticking point was whether AbbVie would pay Shire a big breakup fee if AbbVie shareholders did not approve the deal.

One attraction of the deal was AbbVie’s ability to reincorporate in Britain, lowering its tax rate. But lawmakers in Washington are considering retroactive legislation that would target such deals, known as inversions. If passed, the law would limit the financial advantages of a deal, and Shire wanted protection.

Before starting the deal process, Gonzalez came to believe that even without the benefits of an inversion, acquiring Shire made sense. In the end, Shire agreed to accept a $500 million fee in the unlikely event AbbVie shareholders did not approve the deal.

That Thursday, Kilsby convened the board in Geneva. The AbbVie board met in Chicago. The next morning, July 17, the biggest deal of the year - at $54 billion - was announced.