The UK became the first to approve the vaccine 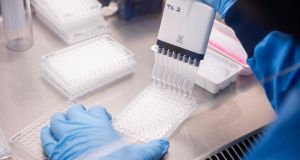 A technician working at the Jenner Institute on the Covid-19 vaccine, co-invented by the University of Oxford and Vaccitech in partnership with pharmaceutical giant AstraZeneca. Photograph: John Cairns/University of Oxford/AFP via Getty Images

Germany expects the European Union to give rapid approval to the coronavirus vaccine developed by Oxford University and AstraZeneca that was cleared for use in Britain on Wednesday, its top vaccines official said.

Berlin’s support for AstraZeneca comes as EU member countries seek to fill supply chains for vaccination drives that began last weekend using a shot from Pfizer and BioNTech - the only one to win EU approval so far.

Germany has made relatively quick headway, reporting a total of 78,000 shots administered, but there have been reports of setbacks with some vaccination centres shutting down temporarily due to supply shortages.

Klaus Cichutek, head of the Paul Ehrlich Institute, said that, thanks to the rolling EU review of the AstraZeneca vaccine, it would be possible to take a quick decision once a formal application was submitted.

No such application had been received by the European Medicines Agency (EMA) by Wednesday morning, Mr Cichutek told reporters, but a debate in its councils would follow as soon as it arrived.

“Once the application is submitted a decision can be taken quickly,” Mr Cichutek told a news conference.

German health minister Jens Spahn urged “a thorough and quick examination” of the AstraZeneca vaccine by EMA, in addition to the expected clearance of a shot from Moderna in early January.

“Vaccination is the key to getting out of this pandemic,” Mr Spahn told reporters.

“Preventing death and suffering is key. It is the key to getting our normal lives back.”

Mr Spahn confirmed that Germany expected to take delivery of 1.3 million doses of the Pfizer shot by the end of the year.

But, even with increased supply going into early 2021, it would take months to inoculate the wider population.

“I can only appeal for patience,” he said. “Please don’t forget that we have a vaccine ... that is reason enough for joy and optimism.”

Amid heightened contagion, continued strong reductions of social contacts would continue to be necessary, officials said.

“It will take months until enough people are vaccinated to reduce the circulation of the virus in the population,” said Lothar Wieler, head of the Robert Koch Institute responsible for coordinating Germany’s pandemic response.

Federal and regional leaders are due to convene in the New Year to discuss whether to extend lockdown measures imposed before Christmas that are due to remain in force until at least January 10th. – Reuters