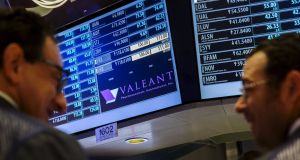 Traders work on the floor of the New York Stock Exchange underneath a board showing the name of Valeant Pharmaceuticals shortly before the opening of the markets in New York October 22, 2015. REUTERS/Lucas Jackson

Investors often say they learn more from investment losers than from winners. That suggests that Valeant, the beleaguered pharmaceutical company whose market value has fallen by more than $50 billion (€45 billion) since August, offers a bounty of teaching moments.

Let’s start with the perils of relying on earnings forecasts and stock valuations based on fantasy, rather than reality. Such a reliance may have lulled some recent investors into believing they were paying a small premium to own Valeant shares when, in actuality, it was costing them the moon. (The stock is still a winner for those who bought shares before the autumn of 2013.)

Valeant is among a growing number of companies that regularly present two types of financial results: those that adhere to generally accepted accounting principles (GAAP) and those that help executives put the best spin on their operations.

In accounting parlance, such adjusted figures – which exclude certain costs from calculations of a company’s earnings – are known as pro forma or non-GAAP numbers. But let’s call them what they really are: a false construct.

Part of the problem with these adjustments lies in the freedom that companies have to choose which costs they want to strip out. One company may exclude stock-compensation costs from its earnings calculations while another in the same industry does not. That makes it difficult to compare operations.

The tide of companies making up their own earnings calculations is rising, said Jack Ciesielski, publisher of The Analyst’s Accounting Observer. In a recent report, he noted that 334 companies in the Standard & Poor’s 500-stock index reported non-GAAP earnings last year, up from 232 such companies in 2009.

The dollar amount of cost adjustments made to those companies’ profits totaled $132 billion last year, more than double the amount in 2009.

“There is a lot more of this going on,” Ciesielski said in an interview. “The companies are really pushing it.”

This creativity is common practice in the pharmaceutical industry, so Valeant is certainly not atypical. But the difference between the company’s real earnings and its adjusted numbers is far greater than it is for its large competitors, making Valeant a prime example of this problem.

In news releases, Valeant executives are careful to include their results under accounting rules. But these communications tend to focus more on the company’s primary, hand-tailored figure – what it calls “cash EPS.” When providing forecasts, for example, the company supplies only pro forma numbers.

Most significant, perhaps, for Valeant are costs related to acquisitions. Generally accepted accounting principles require companies to recognize over time the diminishing value of intangible assets they acquire when buying another company, a process known as amortisation. Valeant exclues those costs.

At Valeant, an acquisitive company, this is a big number. This year alone, Valeant has paid $15 billion for six deals in which terms were disclosed.

Excluding acquisition-related costs from its pro forma figures, including amortisation, makes the company look far more profitable than it is.

The company says it publishes pro forma figures to provide investors with “a meaningful, consistent comparison of the company’s core operating results and trends for the periods presented”. Valeant goes into detail on the expenses it is excluding, so diligent investors can do their own analyses.

A spokeswoman for the company declined to comment further.

Valeant took another blow on Thursday, when the nation’s three largest drug benefit managers said they would stop doing business with a pharmacy that sold Valeant products.

Hedge fund manager Bill Ackman, one Valeant’s biggest stockholders, defended the company in a marathon, three-hour conference call Friday, yet its stock continued to plummet. Looking at Valeant’s real earnings compared with its make-believe ones exposes an enormous gulf.

It’s easier to justify paying up for a stock when you’re relying on ersatz results. Valeant’s shares, at their peak of $262, were trading at an eye-popping 98 times 2014 earnings. Set against the fantasy figures though, the stock carried a multiple of just 31 times. Not a bargain, perhaps, but also not insane.

The fantasy numbers had “displaced GAAP earnings as a primary determinant of stock prices”, its authors wrote.

In an interview, Sloan said he was concerned about the proliferation of companies reporting non-GAAP figures and the challenges that posed to investors.

“I can see the advantages of letting a company with a good management team do its own, voluntary disclosure to help investors understand over and above what’s in the GAAP filings,” Sloan said. “But what goes along with that is companies that use their own numbers to put them in a better light and to mislead investors.”

“You’d hope that Wall Street analysts would recognise you can’t really value a company like Valeant whose business model is to pay cash to make acquisitions by ignoring the amount of cash it is using in those acquisitions,” Sloan said.

Two recent UBS reports are also confusing. On Page 1 of both reports, the analyst cited Valeant’s pro forma figure as “EPS.” Later in the report, the analyst identified the figures as “cash EPS”.

At Merrill Lynch, the Valeant analyst does a better job, presenting both GAAP and pro forma figures, so investors can see the vast differences between the two.

Analysts may feel compelled to use a company’s adjusted numbers when they reflect standard industry practice. At the same time, however, going along with a numbers game may also be a way to stay on good terms with a company’s executives. Analysts who exert independence can find that managers may refuse to answer their questions or otherwise turn off the crucial information spigot.

Back in 2003, after pro forma earnings had begun to gain traction, the SEC wrote a new rule to try to help investors. Known as Regulation G, it requires companies using fantasy figures in regulatory filings to present “with equal or greater prominence”, comparable financial measures calculated under GAAP. The regulation does not cover news releases.

Sloan thinks it may be time for a new rule. “When they did Reg G, things calmed down for a little bit,” he said. “Now things are getting out of control again.”