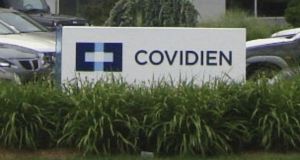 Covidien employed 435 people at the Tullamore plant in the seven months to the end of April 2015 with staff costs, including directors’ remuneration totalling €10.1 million

A subsidiary of Irish-based medtech firm Covidien, the group which was acquired in a high-profile $50 billion inversion deal by Medtronic last year, paid a dividend of €20 million to its parent last year.

Accounts recently filed with the Companies Registration Office for Covidien Ireland Limited, which operates the group’s Tullamore-based manufacturing facility, show pretax profits for the seven months ending April 24th 2015 amounted to €2.4 million. This compares to profits of €3.4 million for full-year turnover. The company achieved turnover of €26.4 million versus €41.8 million for 2014.

A note included in with the accounts says the directors of the subsidiary transferred €12.9 million to the profit and loss account on January 1st, 2015 to facilitate the payment of €20 million on the same date to its parent, which at that point was the Covidien Group, a company incorporated in Luxembourg. The acquisition of Coviden by Medtronic closed on January 26th.

Automation In the accounts, the directors warned that the company was focused on cost reductions and “plans to have additional automation processes in the Tullamore plant in the coming periods”.

“This strategic focus is to guarantee long-term stability of the Tullamore plant in a highly competitive market. Focusing on these cost-saving initiatives will support and sustain this strategy,” the directors said.

Covidien employed 435 people at the Tullamore plant in the seven months to the end of April 2015. Staff costs, including directors’ remuneration totalled €10.1 million.

The manufacturing facility was formerly operated by Tyco Healthcare before its parent Tyco International spun the healthcare products division off as Covidien in 2007.

Covidien Limited, another group company which is based in Ireland, posted a pre-tax profit of $53 million (€47 million) for the seven months ending April 24th, 2015, according to accounts filed earlier this year.

Following its $49.9 billion acquisition of Covidien, Medtronic shifted its corporate headquarters to Ireland in a move that made it the country’s largest company.