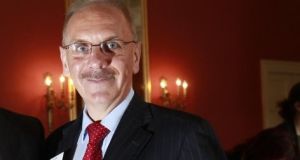 Paul Kelly of suicide charity Console is among the highest-profile spokesmen on the issue. Photograph: The Irish Times

Console is perhaps the best- known organisation in the crowded field of suicide charities and its founder Paul Kelly is among the highest-profile spokespeople on the issue.

The charity has grown rapidly since it was founded in 2002 to help people bereaved by suicide and today it runs a 24-hour suicide prevention helpline and a national network of counselling centres.

As suicide became an issue of major concern in recent years, Console was endorsed by a string of high-profile figures. President Michael D Higgins is patron of the charity, as was his predecessor Mary McAleese. Taoiseach Enda Kenny attended the opening of Console’s centre in Co Mayo and delivered a Christmas message on its behalf.

The organisation has expanded into the UK. Mr Kelly said he was approached by the National Health Service in Britain and also by the London Metropolitan Police, who were concerned about the number of suicides on Tube lines.

Mr Kelly, a recruitment consultant from Celbridge, set up the charity after his 21-year-old younger sister Sharon took her life in 2001.

“Console was born out of my own grief and loss,” he said in a 2014 interview. “With death by suicide, there is an element of choice, and that contributes to very protracted grief for families and for friends. After Sharon died, my mother and father gave up on life, they were crushed.”

Mr Kelly has argued eloquently in the media for greater funding for mental health and suicide prevention, comparing existing levels of support unfavourably to the amounts provided for the prevention of road traffic deaths.

He has also argued that inquests into suicides should be held in private if this is desired by the families involved.

In 2014, he won a People of the Year award “for challenging the perceptions of suicide and having the resolve to create the first dedicated suicide prevention and support services in Ireland”.

Console also received almost €130,000 from the Department of Foreign Affairs between 2013 and 2015, under its emigrant support programme.

According to the accounts, Console has 12 employees and Mr Kelly received consultancy fees of €81,528 in 2014.

Console says its helpline receives about 3,400 calls a month. It has care centres in Dublin, Cork, Galway, Limerick, Kerry, Athlone, Wexford, Mayo and Kildare. It does not charge for services it provides.