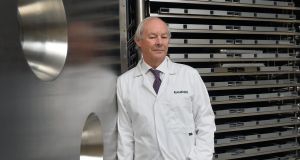 The majority of the group’s turnover is derived from its subsidiary, Randox Laboratories, which also reported a jump in annual turnover last year to more than £81.5 million, although its pretax profits dropped by half from £18.3 million in 2016 to £9.6 million last year.

It is the UK’s largest diagnostics company, employing more than 1,400 people across four key manufacturing and R&D facilities in Antrim, Dungloe in Donegal, Bangalore in India and in the Greater Washington DC area in the United States.

The group has a strong track record of investing in R&D and last year committed a further £10.8 million to development expenditure.

The company estimates that about 100,000 laboratories are currently using some of its products every day and it believes this gives it scope “for greater penetration” of its customer base.

In their strategic report for 2016, the directors of Randox Laboratories note that its proprietary biochip array technology – which allows multiple diagnostics tests to be carried out simultaneously – is a “unique innovation”.

“Our wide customer base provides the capability to offset, geopolitical challenges in one market with increased sales and marketing application elsewhere. We are also focused on those markets with the greatest growth potential and note the prediction that the Asia-Pacific region will have 3.2 billion people defined as economically middle class by 2030,” they state.

The latest accounts show that by the end of 2016 the Randox group had net assets of £73.9 million.