Hack of all trades: the rise of the hackathon

Hackathons, a popular ‘sport’ for innovators, are a fun way of coming up with new ideas 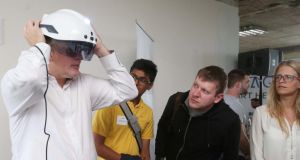 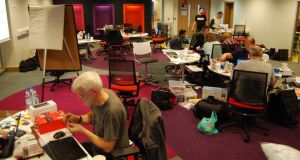 Creative energy: UCD’s 36-hour hackathon. Recently in Ireland universities, companies and enthusiasts have been coming up with their own interpretations of hackathons in hardware, software, teaching and making.

Hackathon. It’s one of those buzzy, energetic terms, but what does it really mean? Oxford Dictionaries offers this definition: “An event, typically lasting several days, in which a large number of people meet to engage in collaborative computer programming.”

However, recently in Ireland universities, companies and enthusiasts have been coming up with their own interpretations of hackathons in hardware, software, teaching and making.

The ‘how’ of a hackathon is pretty straightforward: there is typically a theme, and participants – who often have different backgrounds and expertise – form teams to come up with ideas, solutions and often prototypes over the course of a day or a weekend.

The ‘why’ of a hackathon is a broad canvas that can underpin education, entrepreneurship and creativity, according to Professor Brian MacCraith, president of Dublin City University, which has hosted numerous hackathons.

“A hackathon is a great manifestation of innovation and a focus of creative energy over a short period,” he says. “You start with problem statements or with opportunity statements and then you work through multidisciplinary approaches to come up with solutions; in some cases they are concepts but in many cases they are prototypes.”

“Hardware hackathons can be general or industry-specific, they can be driven by big multinationals or by student clubs, they can be curated or they can be totally open to the public, but ultimately what they all have in common is a huge sense of fun, an openness to new ideas and a big dollop of community-building,” says Ronan Furlong, executive director of the DCU Innovation Campus.

The events draw in mentors and speakers to advise the teams as they brainstorm, build and prepare to pitch their work to a panel of judges for prizes. There also tends to be a commercial focus.

“While forming start-ups is not necessarily the sole aim of the hackathons, it is sometimes a natural offshoot,” says Furlong, who estimates that about six start-ups have their genesis in this series of events; two of those are now based in DCU’s Innovation Campus.

The smart helmet is controlled through gaze-tracking and voice recognition and it integrates cameras, sensors and software to let the wearer “see” augmented information about their environment.

“It allows you to look at the world around you, understand it contextually and insert digital information that is useful to the end user,” says Gaia Dempsey, co-founder and managing director of DAQRI International.

In practice, that could also enable an expert to remotely see what the wearer is seeing and advise accordingly. The helmet is being piloted in various industries, including energy, building and aerospace.

So why a hackathon in Dublin? “It gives you a whole bunch of information about potential hires, potential customers, potential partners, and it also gives you the feedback about what people want to build with our tools,” says Dempsey. “One of the main reasons was to spread the word to the developer community about the jobs we are hiring for and also to activate the community around the ability to build apps for our platform.”

The hackathon itself served as an “augmented interview”, she says.

Last March, around 100 girls aged between 15 and 17 attended a one-day event in DCU hosted by the Insight Centre for Data Analytics and the UK-based Stemettes.

The young women learned how to modify and create websites and then used their newfound skills to imbue sites with a particularly Irish flavour.

The focus is both educational and creative, says hackathon co-ordinator Ruth Blayney, who is a site administrative officer for Insight.

“It is about innovation and creativity and trying to foster this spirit of collaboration,” she says. “It’s not commercial, it is more about a community spirit and that we can do this together.”

In June, Girls Hack Ireland ran smaller, “wearables” hacks as part of Inspirefest 2015 in Dublin. It hopes to continue to run events and workshops to encourage girls to get to grips with STEM skills.

Creativity at the core

“The term hackathon is definitely now being used to describe all sorts of events, it is a bit of a buzzword now,” he says.

McKeown co-ordinates both the Artek Circle hackathon (with designer Hilary O’Shaughnessy) and the annual Science Hack Day in Ireland. In each case, the volunteer-run hackathon spans a weekend and sees people work together to come up with creative solutions just because they are interesting, beautiful or sometimes plain bizarre.

“Above all, we try run a social, friendly event where creativity and curiosity is at the heart; we get people from all backgrounds who simply want to try and make interesting new things for adventure, for playfulness, for science.”

McKeown avoids the commercial focus and prefers minimal prescription about what can and can’t be done in hackathons. Instead he favours giving participants the space to collaborate and explore “frivolous and crazy” ideas.

“We try to give everyone permission to fail,” he says. “You can often learn more from an ambitious failure than an easy, slick-looking project.”

Next February will see a particularly youthful hackathon take place in Belfast, with Future2016 being organised by teenagers for teenagers.

The organisers in question are Adam Flanagan (14) from Belfast and Harry McCann (16) from Dublin, who are planning the 30-hour hackathon and technology conference for 11- to 18-year olds because of the lack of such events aimed at that age group.

“At the end of the event, prizes will be awarded based on the innovation, design and code-efficiency of each solution,” says McCann. “We believe that the tech conference and hackathon model is ideal for teenagers as not only are they gaining practical experience through ‘hacking’ together a solution, but they are also being inspired by the current tech leaders.

“We hope that young people, after listening to our speakers and participating in the hack, will leave inspired and hopefully will start trying to build and create new things for the technology world.”

Know what you are getting into Many flavours of hackathon exist, so talk to the organisers about expectations

Stock up on sleep Hackathons can be long and intense events with little (if any) shut-eye, so try to start in a well-rested state

Be IP-savvy If your idea is potentially valuable, make sure you protect it before you reveal it

Keep an open mind Hackathons are about creativity and collaboration, so get into the spirit of it and pitch in with the team or teams that can benefit from your expertise