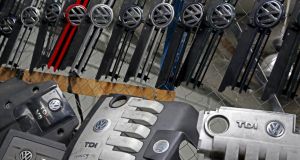 Volkswagen hood masks and covers for diesel TDI engine. “There are serious investigations under way and the focus is now also on technical solutions.” Photograph: Reuters/Dado Ruvic

Germany’s car regulators have asked Volkswagen to provide a plan by October 7th in relation to when its vehicles will meet national emissions requirements, after the firm admitted cheating on US air-pollution tests.

Volkswagen will present a plan in the coming days for how it will fix its affected vehicles and will notify customers and relevant authorities, Peter Thul, a spokesman, said.

VW may have known for years about the implications of software at the centre of the test-cheating scandal, German newspapers reported.

Separately, Bild am Sonntag newspaper said VW’s internal probe had turned up a letter from parts supplier Bosch written in 2007 that also warned against the possible illegal use of Bosch-supplied software technology.

Volkswagen declined to comment on either report. “There are serious investigations under way and the focus is now also on technical solutions” for customers and dealers, a Volkswagen spokesman said. “As soon as we have reliable facts we will be able to give answers.” A spokesman for Bosch said the company’s dealings with VW were confidential.

Bild said Martin Winterkorn, who quit as Volkswagen chief executive last week, was demanding his salary for the rest of his contract to the end of next year but the board did not want to pay it.

Mr Winterkorn was paid €16 million last year, the most of any chief executive in Germany’s blue chip DAX index.

Volkswagen is still coming up with plans to deal with the 11 million cars it built with the affected engines. Its Italian unit has told its dealers to stop selling them, Italy’s Corriera della Sera newspaper reported yesterday. It said that would leave 40,000 cars stuck on Italian lots.

A Volkswagen spokesman said there had been no instructions from company headquarters in Germany to dealers to stop selling the affected cars, but sales units in individual countries had the right to take such decisions on their own.

German politicians have been adding to the pressure on Volkswagen, worried about the reputation of German industry. – (Bloomberg/Reuters)