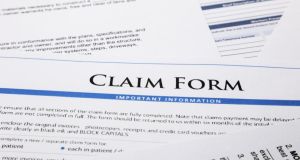 The Central Bank says all insurance firms continue to meet solvency rules but they face the risk of declining profits unless business volumes or prices start to rise. Photograph: Thinkstock

Higher general insurance premiums could be on the way following a recent court judgment, a new Central Bank report has warned.

The non-life insurance sector is already relying on investment income to support profits, according to the bank, with a number of major firms reporting an underwriting loss for last year, with motor, liability and property business under particular pressure.

In its macro-financial review, an examination published every six months looking at the risks facing the overall economy, the Central Bank said a recent High Court judgment that altered the way a significant personal liability claim was calculated could increase the cost of meeting major claims and push up premiums.

All insurance firms continue to meet solvency rules, it said, but they face the risk of declining profits unless business volumes or prices start to rise.

the main risks to the economy are from external factors, such as the Greek crisis, the expected risk in US interest rates and the uncertainties around euro zone growth. These factors and their possible impact on markets provide some dangers to the Irish outlook, the report said, though its assessment of the domestic economy was generally favourable, with GDP growth of 3.8 per cent expected this year and 3.7 per cent next year.

In a special section looking at credit for SMEs, the report said interest rates charged here, averaging 5 per cent during 2014, were well above the euro-area average of 3.5 per cent. The study also found SMEs now typically pay borrowing rates which are 2 percentage points higher than rates for larger firms. This gap has widened in recent years and is now well above the EU average gap between rates for small and large firms which is less than 1.5 percentage points.