Who’s who of the Anglo trials: The convicted and the acquitted 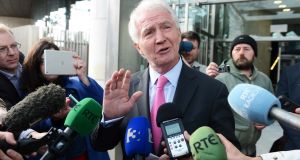 The trial of former Anglo Irish Bank chief executive David Drumm, who was jailed on Wednesday for six years, was the sixth criminal action taken against executives of the bank since its collapse in 2009. Drumm's jail term is the longest imposed on an executive of the now-defunct lender.

In July 2014, Anglo’s one-time director of lending in Ireland, Pat Whelan, and former finance director William McAteer, were each sentenced to 240 hours of community service, having been found guilty that April of being involved in the provision of illegal loans to 10 developers to buy shares in the bank.

The first criminal trial stemming from Anglo’s demise had also seen the bank’s former chairman, Seán FitzPatrick, being charged in relation to the bank wrongly giving €450 million of loans to the investors to buy shares as the bank sought to unwind a leveraged 28 per cent position in the group held by the family of businessman Seán Quinn.

Prosecutors had also sought the convictions of all three in relation to loans extended to the Quinns to underpin their stake – held initially through financial derivatives called contracts for difference (CFDs) but subsequently partly converted into actual shares in 2008. Anglo ended up providing the Quinns with more than €2 billion.

FitzPatrick was cleared on all counts by a jury as the court heard no evidence that he was aware of the loans. Whelan and McAteer were found guilty on the loans to the 10 developers. However, Judge Martin Nolan opted for non-custodial sentences, saying the Financial Regulator had given the “green light” to the share scheme and, effectively, a “State agency led them into error and illegality”.

The three were sentenced for between 18 months, in the case of Maguire, to three years for O’Mahoney, having been found guilty of conspiring to defraud the Revenue Commissioners by deleting or concealing bank accounts connected to FitzPatrick between 2003 and 2004.

Maguire was released from prison that December after the Court of Appeal ruled her sentence was too severe. O’Mahoney and Daly had their convictions quashed in March 2016.

Last November, O’Mahoney was acquitted on all counts in a retrial, with Judge Martin Nolan stepping in to say there was not enough evidence to link the former banker to the crime and that the case should not go to the jury.

In July 2016, McAteer, his former colleague in Anglo’s treasury department John Bowe and the one-time chief executive of Irish Life & Permanent (ILP) Denis Casey were given prison sentences for their roles in a €7.2 billion fraud.

The three men were found by a jury to have been involved in setting up a circular scheme of transactions in which Anglo moved money to ILP and ILP sent the money back to Anglo by way of corporate deposits, via its assurance arm.

The plan served to give the impression that the then-ailing Anglo’s deposit base was stronger than it was in reality. McAteer was sentenced to 3½ years in prison, while Bowe was given a two-year term. Casey was given a sentence of two years and nine months. Former ILP finance director Peter Fitzpatrick, who had also been indicted in relation to the case, was found not guilty.

McAteer was sentenced in January 20017 to 2½ years after pleading guilty to receiving a fraudulent €8 million loan from Anglo in September 2008 in an effort to keep the bank from failing.

Judge Martin Nolan ruled that the survival of the bank was the main factor behind the crime and that the sentence could run concurrently McAteer’s existing prison term in relation to the €7.2 billion deposits-fraud case.

On May 24rd, 2017, on day 127 of the longest-running criminal trial in the history of the State, Judge John Aylmer ordered that Seán FitzPatrick be found not guilty on a charge of hiding millions of euro in bank loans from auditors.

The prosecution alleged that multimillion-euro loans taken out by FitzPatrick and his family were “artificially reduced” for temporary periods at the end of Anglo’s financial years between 2002 and 2007 when they were replaced by short-term loans from other sources, including Irish Nationwide Building Society.

In his ruling, the judge strongly criticised the investigation by the Officer of the Director of Corporate Enforcement (ODCE) into the matter, including the “extraordinary” shredding of documents by the ODCE investigator, Kevin O’Connell, and the coaching of witnesses, meaning there was a real risk to FitzPatrick of an unfair trial.

The case was actually a retrial. The first one collapsed in May 2015 after it emerged that O’Connell had shredded documents potentially relevant to the investigation.

Drumm (51), of Skerries, Co Dublin, was convicted on June 6th on two counts of deceiving depositors and investors into believing that Anglo was healthier than it actually was at the height of the crisis almost a decade ago.

He was sentenced on Wednesday to eight years, spending his first night in Dublin's Mountjoy Prison as prisoner number 102640.

During these proceedings, he was held in custody for five months in a US federal penitentiary. He made a number of unsuccessful applications for bail during this time and ultimately consented to his extradition in March 2016.

Following sentencing in the €7.2 billion ILP deposits case, Drumm still faces 16 counts of offering unlawful financial assistance to Seán Quinn’s family and 10 developers to buy shares in the bank in 2008.