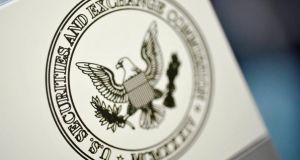 The SEC joins the CFTC and other US authorities including the Justice Department, Federal Reserve, Office of the Comptroller of the Currency and New York’s top banking regulator, in probing the matter. Photograph: Jonathan Ernst/Reuters

The US Securities and Exchange Commission is investigating whether currency traders at the world’s biggest banks distorted prices for options and exchange- traded funds by rigging benchmark foreign-exchange rates, according to two people with knowledge of the matter.

The SEC’s inquiry adds to European and US regulatory probes of possible manipulation in currency markets. The Commodity Futures Trading Commission, which regulates foreign-exchange derivatives, is also investigating possible manipulation, another person said. Authorities from London to New York have contacted at least a dozen banks as they investigate allegations first reported by Bloomberg News in June that dealers said they shared information about client orders to manipulate benchmark spot rates for currencies. Derivatives such as options account for more than half of the $5.3 trillion-a-day foreign-exchange market; the rest is made up of spot transactions.

The involvement of the SEC, which regulates certain options and ETFs tied to the rates, shows how manipulation could ripple across a range of financial products.

“Any corporation with global operations has to hedge currencies using futures and swaps,” said John Coffee, a securities law professor at Columbia University in New York. “If the FX market is manipulated, it can create a loss that is passed on to the consumer and shareholders.”

John Nester, a spokesman at the SEC, and Steve Adamske, a CFTC spokesman, declined to comment.

The SEC joins the CFTC and other US authorities including the Justice Department, Federal Reserve, Office of the Comptroller of the Currency and New York’s top banking regulator in probing the matter. Bank of England Governor Mark Carney will appear before Parliament’s Treasury Committee tomorrow to testify after minutes released by the central bank last week showed senior traders had discussed their concerns that currency benchmarks were being manipulated as early as July 2006. The British investigation is being led by the markets regulator Financial Conduct Authority.