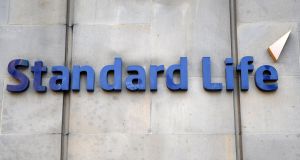 Edinburgh-based Standard Life employs over 8,000 and Aberdeen has over 2,800 staff. Photograph: Andy Rain/EPA

Standard Life and Aberdeen set out the terms of their proposed £11 billion (€12.7 billion) merger on Monday, saying they expected the deal to save the combined companies up to £200 million (€231 million) in costs.

The groups said the new company, to be headquartered in Scotland, would take a one-off £320 million (€369 million) cash charge to cover integration costs.

Aberdeen’s two-biggest investors, Mitsubishi UFJ Trust and Banking and Lloyds Banking Group, have both given non-binding statements of support to vote in favour of the planned takeover, which the companies say they expect to complete in the third quarter of 2017.

Under the terms of the deal, Aberdeen shareholders would own 33.3 per cent and Standard Life shareholders would own 66.7 per cent of the combined group. However, it is thought several hundred jobs are at risk in Scotland and in the City as the duo pointed to cost savings that could add up to £200 million (€231 million). Edinburgh-based Standard Life employs over 8,000 and Aberdeen has over 2,800 staff.

Nevertheless, a Scottish Government spokesperson welcomed the deal: “The proposed merger is a potential vote of confidence in Scotland’s financial services sector.”