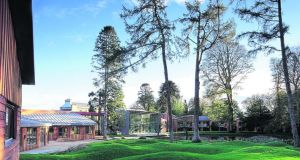 The five-star Monart hotel and spa in Co Wexford. It is included in the sale of Ulster Bank’s Project Coney portfolio to Sankaty Advisers

Ulster Bank has agreed the sale of its Project Coney portfolio to Sankaty Advisers, a US-based affiliate of investment group Bain Capital.

It is not clear how much Sankaty has paid to acquire Coney, but it would have been at a substantial discount to the outstanding balance of €465 million on the loans. The market value of the properties is estimated at €187 million and an overdraft of €14 million is also included.

Some 89 per cent of the remaining loan balance is in default and involves more than 200 borrowers. Dublin accounts for about 40 per cent of the market value of the loans.

The portfolio includes loans concerning some high-profile assets, including the five-star Monart hotel and spa, Hotel Kilkenny, and the 102-bedroom Ferrycarrig property. These form part of Griffin Hotels, a chain controlled by the former Wexford hurler Liam Griffin, and more than €20 million is owed on the properties.

Other loans in the sale are linked to high-profile hotels including the Radisson in Athlone, the Camden Deluxe in Dublin, Trim Castle and the Tullamore Court in Offaly.

A number of well-known pubs in Dublin are also part of Coney, including Vaughan’s and Bradys pubs in Terenure, House nightclub on LeesonStreet, Toners on Baggot Street, The 51 on Haddington Road, and the Waterloo in Ballsbridge.

RBS received about £1.1 billion from the sale of Project Aran, which closed in the first quarter of this year and involved about 5,000 assets.

The sale was carried out by RBS Capital Resolution, a work-out vehicle set up by the UK bank to reduce higher risk exposures. It has reduced its book of troubled Irish assets from £4.8 billion gross to about £1.5 billion in the past 18 months.

Ulster Bank is also selling Project Trinity, which involves 6.8 acres of development land in Ballsbridge that was acquired by Seán Dunne at the height of the property bubble for €380 million.

It is also planning the sale of a €2.5 billion portfolio of loans to SMEs, buy-to-let investors and commercial property.

Ulster Bank was advised on the sale by KPMG.

With an investment team of 40 based in London, Sankaty has been busily buying assets across Europe in the past three years, acquiring portfolios worth about €2.7 billion from various banks.

In March 2014, it announced the acquisition, alongside Canyon Capital Advisers, of a portfolio sold by the liquidators of Irish Bank Resolution Corporation. The loans were secured on QHotels Group in the UK.

Its most recently announced deal was the acquisition of a Spanish loan portfolio, with a par value of €560 million earlier this month.

Sankaty also operates a joint venture in Ireland with wealthy financier Dermot Desmond, called Broadhaven Credit Partners. It was set up with €200 million to invest, primarily in the development of residential housing here.

No comment was available last night from either Sankaty or Ulster Bank.