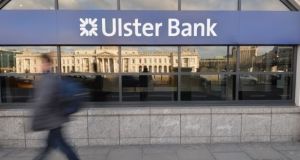 Ulster Bank has appointed global consulting group McKinsey to identify growth opportunities for the company in the Republic and to look at issues around culture and how it conducts its business in the digital age.

The appointment was made recently by Ulster Bank’s new chief executive Gerry Mallon, who took over in June and is himself a former consultant with McKinsey.

It is understood that the appointment is for about eight to 12 weeks, with McKinsey reporting to Paul Stanley, Ulster Bank’s finance chief who was interim chief executive before Mr Mallon’s arrival.

Ulster Bank’s parent company, Royal Bank of Scotland, last year committed itself to its Irish subsidiary following a strategic review of the business.

The UK bank, which had bailed out its Irish unit to the tune of £15 billion following the crash, decided to separate Ulster Bank’s operations north and south of the border, making the business in the Republic a separate operating entity.

Mr Mallon has been charged with formulating a growth strategy for the standalone entity.

Commenting on the appointment, Ulster Bank said: “A small team from McKinsey is supporting our business with a piece of work we have undertaken to identify and leverage opportunities in the Irish market. This work supports our ambition to become the number 1 bank for customer service, trust and advocacy.”

In an interview with The Irish Times last month, Mr Mallon said his vision for Ulster Bank in five years’ time was for it to be a “ valuable and profitable growing part” of RBS.

“I think we will be regarded as a hungry innovator in the Irish market and somebody that is setting the benchmark for change and growth,” he said.

Larry Broderick, general secretary of the Financial Services Union, said it had been offered the opportunity to have an “input” into the review, which he welcomed.

He said Mr Mallon’s signal that RBS was prepared to invest in and develop Ulster Bank in the years, ahead and would “seek to build off the RBS model” , was a “welcome development”.

The union chief was “realistic enough to know” that the future of Ulster Bank’s branch network would form part of any review going forward. “But it’s not all about closing branches and we’ll respond to that positively,” he said, adding that the FSU would also be stressing its view that Ulster Bank was being charged too much by RBS for certain support services.

“It’s unsustainable for the parent company to be charging them such high costs,” he said.

Ulster Bank made an adjusted profit of €155 million in the Republic in the first half of 2016 while its total income rose by 2.5 per cent to €377 million.

The bank’s operating expenses rose sharply due to a €118 million provision relating to tracker mortgage redress.