Bank of America planning to add 100 jobs to Irish operations 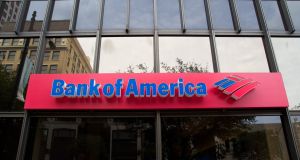 Bank of America Merrill Lynch is planning to add 100 jobs in Ireland as it seeks to expand its global technology and operations hub in Dublin.

Executives from the US banking giant briefed Government officials on the matter last week, according to sources. The move would increase the group’s Irish-based staff numbers by 17 per cent to over 700. A final decision has not yet been made.

Bank of America’s Irish operation – it has offices in Leopardstown and Hatch Street in central Dublin – has been headed by Peter Keegan since late 2009.

While investment banks from Citigroup to Credit Suisse are considering moving more operations to Dublin from London to ensure they have continued access to the single European market as the UK prepares to exit the EU, Bank of America Merrill Lynch’s expansion plans in Ireland are unrelated to Brexit, according to one source.

This month the banking group signalled its commitment to maintaining its level of employment in London, where 1,200 of its bankers and 600 back-office staff are based, by hiring property agents to find 500,000sq ft of office space, similar to the size of its current location in the City, according to reports. The bank has to decide whether to extend its exiting lease by the end of the decade or move elsewhere in the UK capital.

Most of the group’s Irish employees are based in the Irish branch of London-headquartered Bank of America Merrill Lynch International. They work in areas from global traction services and aircraft leasing to the technology and operations hub.

However, the group’s Irish subsidiary, Merrill Lynch International Bank (MLIB), is better known in banking circles for having by far the biggest balance sheet of any lender based in the country – before the group decided to shift its half-a-trillion-euro financial derivatives across the Irish Sea in recent years.

At its height in 2013, MLIB had $593 billion (€558.6) of assets – three times that of Bank of Ireland. It began moving its financial derivatives portfolio, the bulk of the assets, to the UK four years ago as part of a move to simplify the group’s structure.

A financial derivative is a contract between two parties linked to the future value of an underlying asset, such as shares, bonds or commodities.