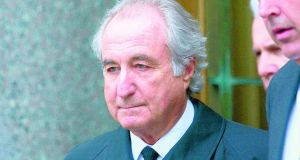 The Supreme Court has cleared the way for a full hearing of a claim concerning multimillion losses related to the Ponzi scheme run by jailed US fraudster Bernie Madoff. Photograph: Mario Tama/Getty Images

The Supreme Court has cleared the way for a full hearing of a claim concerning multimillion losses related to the Ponzi scheme run by jailed US fraudster Bernie Madoff.

Defender Ltd, a British Virgin Islands (BVI) registered investment fund, had sued HSBC Institutional Trust Services (Ireland) Ltd, of Grand Canal Sq, Dublin for €141 million, but the case will proceed against HSBC France on foot of a consent order made last May.

Defender appealed to the Supreme Court after a late 2018 High Court ruling on a preliminary issue cast doubt on the case proceeding in full.

Defender alleges negligence and breach of contract regarding the HSBC company’s alleged role as a custodian of funds lost as a result of fraud by its alleged sub-custodian Bernie L Madoff Securities LLC.

That company was operated by Madoff, who was involved in a €65 billion Ponzi scheme in the US.

Mr Justice Michael Twomey, in the High Court, said that the issue arose because Defender settled its claim for the return of $540 million with Madoff’s company for at least 75 per cent of that sum. It is suing the HSBC subsidiary as an alleged concurrent wrongdoer, with Madoff, for the balance of its loss.

The judge said fraud by Madoff and alleged negligence by the HSBC business were alleged by Defender to have led to the same damage.

For the purposes of the preliminary ruling only, he found Madoff and the HSBC business to be “concurrent wrongdoers” in relation to the loss caused to Defender. And he upheld arguments by the HSBC trust services unit that, because Defender has settled its claim against Madoff and that settlement was with one wrongdoer, Defender cannot pursue the other wrongdoer.

Mr Justice O’Donnell said, while the High Court was correct, as a matter of orthodox statutory interpretation, in its construction of section 17, it had wrongly concluded the only possible outcome of the application of sections 17 and 35(1)(h) of the Civil Liability Act was apportionment of 100 per cent liability against Defender.

Neither section 16 nor 21 of the Act provide a basis for dismissing the damages claim from the start, he also found. On those and other grounds, the appeal was allowed.

If the case proceeds, the judge said, the HSBC side may defeat Defender’s claim or, conversely, will be liable to Defender in an amount equal to, or exceeding, the balance of Defender’s claim after payment under the settlement with the Madoff trustee. If that happened, the proceedings would end and it would not be necessary to address outstanding matters concerning interpretation of the Civil Liability Act.

If findings are made which lead to a shortfall in Defender’s recovery of damages found to have been occasioned to it by negligence of the HSBC business, an issue concerning the constitutionality of section 17 may have to be addressed.