US investment bank settles with agency after overcharging in asset sale 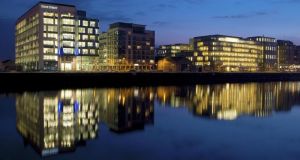 State Street, the US investment bank, had paid the National Treasury Management Agency compensation of €852,000 as a final settlement, after its controversial overcharging of the agency in 2010 and 2011. State Street had already repaid €3.2 million which it overcharged the NTMA when it was selling down assets from the National Pension Reserve Fund to release cash required as part of the EU/IMF bailout.

The payment has been confirmed by the NTMA, which said that the compensation was paid “in a spirit of goodwill and with intent to compensate the National Pension Reserve Fund (NPRF) for any costs incurred in resolving the matter.” It added that the payment would “constitute a full and final settlement.” The NTMA is the parent agency of the NPRF.

The overcharging occurred after the NTMA hired investment managers to sell assets of €6.8 billion to raise some of the funds which Ireland required as part of the bailout agreement with the EU and IMF. State Street, the US financial giant, was one of two firms appointed and sold €4.7 billion in assets between February and May 2011. However it subsequently emerged that State Street had applied approximately €2.65 million in commission over and above the amount agreed under the contract.

This amount, together with the overcharge, has already been repaid to the NTMA. However after the initial repayment NTMA chief executive John Corrigan said the matter was not closed and that the NTMA would await the outcome of regulatory investigations.

The NTMA reported the incident to the Garda and the City of London Police launched an investigation. The NTMA also informed the relevant regulator, the Financial Conduct Authority (FCA), which fined State Street UK £22.9 million earlier this year, saying it had found that “significant failings in culture and controls allowed deliberate overcharging to take place and to continue undetected.”