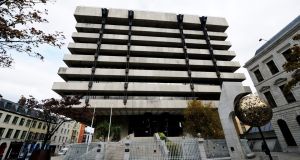 Minister for Finance Michael Noonan has said the Central Bank of Ireland did not seek his permission to issue retention payments to staff.

The Central Bank also told the Minister it has obtained legal advice that the payments are compliant with the Government’s Fempi legislation, which gave the Government emergency powers to cut public service pay and ban bonuses after the economic crash.

Last week, Robert Watt, the secretary general of the Department of Public Expenditure and Reform, told the Public Accounts Committee that his department was surprised to hear about these payments by the Central Bank.

In response to a question from Fianna Fáil finance spokesman Michael McGrath, Mr Noonan said the Central Bank is independent under the statute covering the European System of Central Banks.

“Given this independence, the permission of my department was not sought for the payment of retention payments or bonuses,” he said.

“The remuneration policy of the bank is determined by the Central Bank Commission, which must take account of the need for the bank to fulfil its essential financial regulation functions,” he said.

“However, in doing so, the bank’s remuneration policy must also abide by the Fempi legislation . . . I have been informed by the Central Bank that it has obtained legal advice that the payments under its retention policy are compliant with the Fempi Act.”

Separately, members of the Unite trade union are to vote on a motion of no confidence in senior management at the Central Bank in a row over these retention payments. Unite’s regional officer, Colm Quinlan, said it was “extremely disturbed” to discover that while its members at the bank were holding their agm on Wednesday, the regulator had issued a statement confirming that, “contrary to previous denials”, such payments had been in operation since 2011.

“These actions indicate a worrying level of disrespect for their staff and for the general public,” Mr Quinlan said.

He called on the Central Bank’s new governor, Philip Lane, to make the issue a priority as he takes office.