String of public figures forced to resign in fallout from crisis 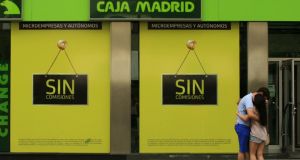 The Spanish high court is investigating the credit cards, which were given out by Caja Madrid savings bank and Bankia, the lender that absorbed it in 2010, and they were not registered in official accounts.

Revelations related to how 82 executives and board members of a Spanish bank were given credit cards to spend freely on personal items and without apparent controls have dealt a blow to efforts to restore the image of the country’ financial sector.

The high court is investigating the credit cards, which were given out by Caja Madrid savings bank and Bankia, the lender that absorbed it in 2010, and they were not registered in official accounts. The cards were in use between 2003 and 2012, when new leadership took over at Bankia, and an estimated €15.5 million was charged to them. Four further bank executives had access to the cards but chose not to use them, according to reports.

A string of public figures have been forced to resign from their posts after it emerged earlier this month that they had used the cards. Many were politicians from the governing Popular Party (PP) and the main opposition Socialist Party, or senior union figures. However, last week the royal family was tainted by the scandal, after it emerged that Rafael Spottorno, a private advisor to King Felipe VI, had spent €224,000 with one of the credit cards. He immediately stepped down.

According to information released by the investigation, the biggest spender was Caja Madrid’s former chief financial officer, Ildefonso Sánchez, who charged €574,000 to his credit card. On New Year’s Eve in 2009 alone, he spent €16,000.

Miguel Blesa, the former chairman of Caja Madrid, spent €437,000, €82,000 of which he withdrew at cash machines. His expenses included an African safari, luxury health spas, hotels and €10,000 worth of wine. According to El País newspaper, Mr Blesa oversaw the under-the-table credit card scheme, as a way of controlling senior bank staff.

The government part-nationalised Bankia in 2012 after the lender’s mismanagement during the country’s property bubble became apparent. That same year it became the biggest beneficiary of a €40-billion EU bailout for the Spanish banking sector. With the economy finally recovering from a double-dip recession, the government has been trying to restore Spaniards’ faith in their financial system.

“The biggest problem with this case is how the bank was governed,” noted economic commentator Joaquín Estefanía. “ (it shows) there was an arbitrariness in the management of savings banks.”