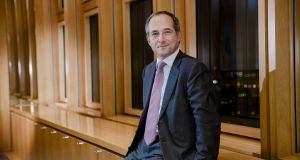 Net income fell 2.4 per cent to €1.1 billion from a year earlier, the Paris-based bank said Thursday. That beat the €790 million average estimate of six analysts surveyed by Bloomberg. Equities trading revenue rose 17 per cent to €482 million.

France’s second-largest bank by market value is shutting branches at home and cutting costs as higher capital requirements and record-low interest rates crimp returns. Unlike Deutsche Bank and Credit Suisse Group, Societe Generale has avoided a deep restructuring of its investment bank and has expanded this year through takeovers in private banking and car leasing.

The bank is “able to post resilient profitability” despite the low and negative interest-rate environment, Mr Oudea told Bloomberg Television in an interview. Still, reaching a 10 per cent return-on-equity objective this year will be “difficult,” even if the bank is “delivering step by step to meet this target in the mid term”.

Revenue fell 5.6 per cent to €6.01 billion in the third quarter from a year earlier, beating the €5.94 billion estimate of analysts. The bank set aside €417 million in provisions for doubtful loans, a 27 per cent decline from the previous year.

Societe Generale’s shares have fallen 20 per cent since the year began, compared with a 21 per cent decline in the Bloomberg Europe 500 Banks and Financial Services Index. BNP Paribas SA, France’s largest bank, is down 2.8 per cent in 2016.

Net income at Societe Generale’s global banking and investor solutions division, which houses the investment bank, rose 42 per cent to €469 million. Equity-trading income benefited from an increase in demand for structured products, especially in Asia. Revenue from trading bonds, foreign exchange and commodities jumped 42 per cent to €687 million, driven by credit and rates. Revenue from advisory and corporate financing rose 1.1 per cent.

BNP Paribas, France’s largest bank, last week posted an unexpected increase in profit as its fixed-income revenue surged 41 per cent in the third quarter. The UK’s surprise June vote to exit the European Union and uncertainties over the outlook for global interest rates helped spur bond trading in Europe and the US. The five top US investment banks collectively saw a 49 per cent revenue surge in that business.

Mr Oudea said that any post-Brexit rebalancing of its business would be relatively easy for Societe Generale given its operations in Paris and London. The bank is aiming to limit market risks before the US presidential election next week and French and German votes next year.

Net income at Societe Generale’s French consumer-banking unit dropped 15 per cent to €353 million, as low interest rates squeezed lending margins and financial fees, the bank said. The unit’s revenue fell 6 per cent to €2.04 billion while its costs rose 1.5 per cent, partly on investments to improve digital offerings. Societe Generale is seeking to reduce the number of its French branches by 20 per cent through 2020.

Profit from international retail banking and financial services, including insurance and car-leasing, rose 31 per cent to €457 million, Societe Generale said. In Russia, the company’s second-largest market by staff, the company swung to a €7 million profit from an €18 million loss a year earlier.

Societe Generale’s common equity Tier 1 ratio, a key measure of financial strength, rose to 11.4 per cent at the end of September from 11.1 per cent on June 30.