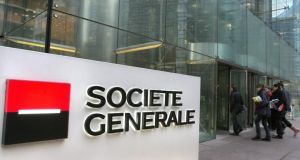 Frederic Oudea, who has held both roles since 2009, will remain CEO, the Paris-based company said in a statement today.

“This change in corporate governance, prepared in 2014, meets the requirements applicable to banks in Europe,” Societe Generale said in the statement.

“It will allow Societe Generale to continue implementing its strategy and its transformation.”

Societe Generale is facing an economic stagnation in France, its biggest market, and a slowdown in Russia, where it has one of the largest foreign consumer branch networks. The shares climbed 1.3 percent to 34.55 euros as of 9:30 a.m. in Paris today. The stock is down 22 per cent over the past 12 months, for a market value of 28 billion euros ($32 billion).