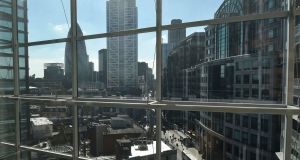 The City of London. The UK financial sector led the FTSE 100 lower on Wednesday. UK retail investment house Hargreaves Lansdown led the fall after it reported lower than expected revenue and earnings for the half-year to December.

Global share markets are enduring a torrid year, with financials leading the way, alongside other key sectors that reflect prospects for the broad economy, such as energy, materials, transports and industrials.

Gary Greenwood, banks and specialists lender analyst at Shore Capital, believes the UK bank sell-off is a continuation of the recent trend - the FTSE All-Share Banks index is down 15.7 per cent in the year to date.

“Banks are very much levered plays on the economies that they are in and investors have gotten more nervous about those economies. When you look at how levered banks still are that makes them very difficult to value with conviction and therefore you just get indiscriminate selling regardless of price or valuation,” he said.

A weaker tone for London listed bank shares follows a pattern set by Wall Street, with S&P 500 financials the worst performing major sector this year, down nearly 14 per cent. The S&P was lower on Wednesday morning in New York, led by financials.

US banks have weakened after downbeat fourth-quarter earnings and on concerns over lower margins with the flattening yield curve and the lenders’ exposure to the US energy sector which is being hurt by low oil prices. Long-term yields have fallen sharply this year, compressing net interest margin expectations for the banking sector.

In turn, the best performing sector on the S&P 500 since the start of January is utilities, up more than 7.5 per cent in the year, reflecting a search for returns in a world where falling long-term interest rates are compressing yield curves.

Long-term UK gilt yields have also fallen appreciably this year, even as the banking sector provides much higher returns for investors. The FTSE All-Share Banks index has a dividend yield of 5.3 per cent compared with the 1.5 per cent yield on the 10-year UK gilt.

Bond rates in Europe have fallen to new lows as investors anticipate further easing from the European Central Bank. The Euro Stoxx Banks index is down about 24 per cent so far this year.

Japan’s Topix Bank index is down nearly the same amount this year, but almost half of that decline happened since the Bank of Japan’s surprise negative interest rate announcement last Friday. Even though the negative rates apply only to new reserves, the market seems to calculate that the impact on Japanese bank earnings could outweigh asset price inflation.

In contrast to the BoJ’s easing, no policy change is expected at the Bank of England Monetary Policy Committee meeting on Thursday.

The UK financial sector led the FTSE 100 lower on Wednesday. UK retail investment house Hargreaves Lansdown led the fall after it reported lower than expected revenue and earnings for the half-year to December.