About £500m wiped off RSA’s market capitalisation in London 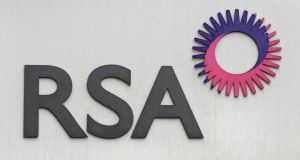 During a conference call yesterday, analysts grilled RSA directors about the implications of the two successive profit warnings on the insurer’s levels of debt, the adequacy of its controls and the possibility of disposals.

Shares in RSA dropped as much as 16 per cent yesterday as investors had their first chance to respond to accounting irregularities at the insurer’s Irish business that prompted it to issue a second profit warning within a week.

About £500 million (€597 million) was wiped off RSA’s market capitalisation in London as analysts raised concerns about the sustainability of the FTSE 100 group’s dividend – even after it was cut earlier in the year – and reduced their profit forecasts for this year by as much as a third.

The sell-off came after RSA delivered a €100 million capital injection into its Dundrum-based Irish division to strengthen its solvency ratio.

Conference call
During a conference call yesterday, analysts grilled RSA directors about the implications of the two successive profit warnings on the insurer’s levels of debt, the adequacy of its controls and the possibility of disposals.

Chief executive Simon Lee said for the first time that the problems – which RSA had described in a statement on Friday as “issues in the Irish claims and finance functions” – included accounting irregularities.

Pre-empting questions about why RSA had waited until 6.30pm on Friday to issue the fresh warning, after it had downgraded forecasts on Tuesday, he said problems the group had disclosed earlier were “relatively minor”.

It was only later in the week, after the insurer had looked at an apparent shortfall in reserves at the motor insurance business more closely, that it realised the problems were more serious.

Mr Lee acknowledged that RSA’s capital position was “not as flexible” following the two warnings and said the insurer would take a “judicious” approach to any acquisitions.

“Clearly the dividend cover is tighter,” he added. But he said he was “comfortable” with analysts’ existing forecasts that RSA would maintain its dividend.

The problems came to light because of a “routine internal audit”, RSA said. After holding an emergency board meeting over the weekend, RSA has appointed PwC to conduct a review focusing on the Irish business but also looking for failings in group controls.

RSA will not publish the report but has pledged to make public the “key conclusions”.
– Copyright The Financial Times Limited 2013

1 Consumer mood darkens, businesses react to Level 5 and Diageo launches Guinness 0.0
2 Guinness brings out a non-alcoholic version of the black stuff
3 John FitzGerald: North needs reform more than unity
4 If lockdown has morphed from tactic to strategy, the State has failed
5 How long can Government afford to keep State pension age at 66?
6 Sherry FitzGerald aims for bigger share of broker market
7 How much will a Covid-19 vaccine cost?
8 US set to drop sanctions against Irish person in Pacnet inquiry
9 Frank Fitzgibbon stepping down as Sunday Times editor
10 Paul Coulson plans record $1.8bn Ardagh investment
Real news has value SUBSCRIBE