UBS, HSBC and Citigroup, Royal Bank of Scotland and JP Morgan all fined after probe 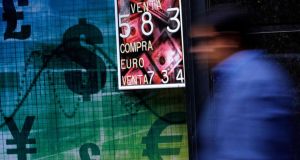 Global regulators imposed penalties totalling $3.4 billion on five major banks, including UBS, HSBC and Citigroup on Wednesday in a landmark settlement over allegations of price fixing in the foreign exchange market.

Royal Bank of Scotland and JP Morgan were also fined for attempting to manipulate foreign exchange benchmarks in a year-long probe that has put the largely unregulated $5 trillion-a-day market on a tighter leash, with dozens of dealers suspended or fired.

Finma also ordered Switzerland’s largest bank to automate at least 95 per cent of its global foreign exchange trading and limit bonuses for traders of foreign exchange and precious metals, where it said it had also found evidence of serious misconduct, to 200 per cent of their base salary for two years.

Other bank employees who earn more than 200 per cent of their base salary in bonuses will have to undergo an approval process.

Finma has started enforcement proceedings against 11 former and current employees of UBS.

Barclays, a major player in the foreign exchange market, had been expected to be part of the settlement but the FCA said its investigation into the UK bank was continuing.

The UK regulator’s first group settlement, worth more than $1.7 billion, eclipses the £460 million it has so far fined the industry for alleged interest rate manipulation, reflecting increasing political and public demands that banks -- blamed for sparking the 2008 credit crisis -- are held accountable and culpable for misconduct.

The US CFTC fined the five banks more than $1.4 billion for attempted manipulation.