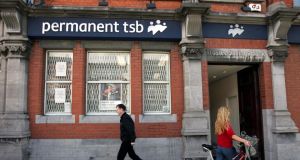 Permanent TSB has reported a 21 per cent decline in mortgage arrears of over 90 days since the start of the year.

The unit was set up in 2012 to tackle the high number of problem mortgage accounts left on its books in the wake of the crash.

The bank’s figures show there were 4,357 fewer home-loan customers in arrears of over 90 days at the end of August than at the beginning of the year - a fall of 21 per cent.

The unit received 27,500 completed Standard Financial Statements (SFSs) from customers between January and the end of August this year.

About 300 completed SFSs were now being received each week, down from highs of 600 to 700, the bank said.

On average the AMU proposes a solution to customers within just 10 days of receipt of a completed statements, it said.

Shane O’Sullivan, managing director of the AMU, said that split mortgage arrangements - where part of the loan is put aside for a fixed term - accounted for 26 per cent of the proposed solutions.

“The split mortgage is a key offering and our experience is that home loan customers are very positive about the arrangement.”

“We charge 0 per cent interest on the warehoused section of the mortgage and we review a customer’s circumstances - typically every three years - with a view to ultimately eliminating the warehoused amount,” Mr O’Sullivan said.

“Our experience is very clear on this; when customers engage with the bank on their arrears they are receiving practical and workable restructurings which they understand and which they can live with.”

Repossession of properties is a last resort and the vast majority of our proposals see customers remain in their homes - once they engage with us on their situation.”

The bank’s half-year accounts, published last month, show it wrote off €73 million in Irish residential mortgage loans in the first six months of this year.

This was almost seven times the level of write-off in the same period of last year.