David Cameron’s late father is mentioned in the files, alongside some Tory party members 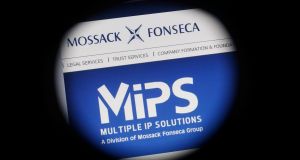 The website of the Mossack Fonseca law firm is pictured through a large format lens. Photograph: Reuters

The British government asked on Monday for a copy of leaked data on the clients of a Panama-based law firm so it can examine the information and act on any possible tax evasion.

The leak, which reveals the details of hundreds of thousands of clients in multiple jurisdictions of law company Mossack Fonseca, could be embarrassing for British prime minister David Cameron, who has spoken out against tax evasion and tax avoidance.

The documents are at the centre of an investigation published on Sunday by the International Consortium of Investigative Journalists, of which The Irish Times is a member, and more than 100 other news organizations around the globe.

The German newspaper Sueddeutsche Zeitung said it received the huge cache of documents and shared them with the other media outlets.

The leaked “Panama Papers” cover a period over almost 40 years, from 1977 until last December, and allegedly show that some companies domiciled in tax havens were being used for suspected money laundering, arms and drug deals and tax evasion.

David Cameron’s late father, Ian Cameron, is mentioned in the more than 11.5 million documents from the files, alongside some members of his Conservative Party in the upper house of parliament, former Conservative lawmakers and party donors, British media said.

Mr Cameron’s office declined to comment. The documents emerged in an investigation published on Sunday by the International Consortium of Investigative Journalists (ICIJ) and more than 100 other global news organisations.

Jennie Granger, director general of enforcement and compliance at HM Revenue and Customs, said the government had received “a great deal of information on offshore companies, including in

Panama, from a wide range of sources, which is currently the subject of intensive investigation”.

“We have asked the ICIJ to share the leaked data that they have obtained with us. We will closely examine this data and will act on it swiftly and appropriately,” she said in a statement.

The government said Britain had brought in more than £2 billion (€2.5 billion) from offshore tax evaders since Cameron’s Conservatives took office in 2010 and that it was clear “the days of hiding money offshore are gone”.

Foreign secretary Philip Hammond told the BBC: “It’s always interesting when information like this leaks because it reminds people who are up to no good how fragile and how vulnerable they make themselves by indulging in this kind of activity.

“We’ve got an anti-corruption summit here in May. This is a key agenda for the Prime Minister. “We’re working with many countries around the world including

Panama - I had a meeting with the Panamanian vice president just a few weeks ago on this issue. “We are making significant progress.”

Tax authorities in Australia and New Zealand have started investigations into local clients of a Panama-based law firm at the centre of a massive data leak for possible tax evasion.

Other jurisdictions are likely to follow suit following the leak over the weekend of details of hundreds of thousands of clients in more than 11.5 million documents from the files of law firm Mossack Fonseca, based in the tax haven of Panama.

Sweden’s Financial Supervisory Authority (FSA) said on Monday it has contacted authorities in Luxembourg to ask for information related to allegations that banking group Nordea helped some clients to set up accounts in offshore tax havens.

The information about Nordea was included in a leak of more than 11.5 million documents from the files of law firm Mossack Fonseca, based in Panama.

“We take this extremely seriously,” said Christer Furustedt, head of the FSA department overseeing major Swedish banks. Nordea was fined the maximum 50 million crowns ($6.14 million) in May 2015 for deficiencies in its approach to tackling money laundering.

Austria’s financial markets regulator FMA said it is investigating whether lenders Raiffeisen Bank International and Hypo Landesbank Vorarlberg followed rules against money laundering after they were named in a massive international data leak.

A spokesman for the FMA said on Monday it was examining whether procedures such as checks on the nature of transactions and those involved in them were adhered to. If necessary, it can report cases to criminal authorities, he added.