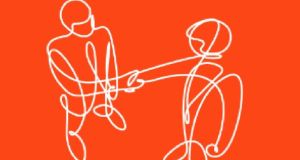 Latest accounts for Linked P2P Ltd show it had accumulated losses of just more than €1 million at the end of April 2015.

These loans have been funded by “ordinary people” wanting to get “good returns on their savings”, Mr Dorrian said. “But to really fulfil our ambitions and grow to being the number one non-bank SME lender in Ireland, we need to develop [bigger] relationships and partnerships.”

This lending will be scaled up over the three years to peak at about €200 million in 2019.

“There’s a huge opportunity in Ireland to give this as a viable alternative to SMEs as opposed to the traditional finance outlets,” Mr Dorrian said, noting that some £14 billion has been provided in the UK to date in peer-to-peer lending.

At present, about 95 per cent of lending to Irish SMEs is provided by the banks. “We don’t see ourselves going absolutely head to head with the main banks in terms of fighting for business,” he said. “We believe strongly that there’s a huge opportunity within under-served SMEs or discouraged borrowers . . . people who have become so discouraged by the process that they have to go through.”

It has already partnered with Microfinance Ireland on some loans and is “having conversations” with the Strategic Banking Corporation of Ireland (SBCI), the State agency charged with providing funds to SMEs here.

“We’d be very keen to form a partnership with the SBCI over the next 12 months, certainly,” Mr Dorrian said.

Linked Finance makes its money by charging a fee of 2.5 per cent of the gross loan amount and 1.2 per cent per annum on the outstanding principal.

“To move us to profitability, we need to scale up and increase that volume,” Mr Dorrian said.

Latest accounts for Linked P2P Ltd show it had accumulated losses of just more than €1 million at the end of April 2015. “That’s pretty standard for any tech start-up as you try to grow your market share,” Mr Dorrian said. “We’re well funded at this point. We had money come in from Frontline Ventures last year for €2.5 million. So our focus now is on investing in growth.”

The minimum loan amount starts at just €50, with interest rates ranging from 8 to 12 per cent. To date, it has facilitated loans for more than 420 Irish SMEs and the default rate has been 1.16 per cent.

The company has 16 staff, which Mr Dorrian expects to grow to 64 within two years.

His most recent role was as a consultant last year with Digicel, the telecoms group owned by Denis O’Brien. He had previously run Digicel’s Trinidad and Tobago business, spent almost two years as head of its eastern Caribbean region and was interim chief executive of its operation in Panama. He was also a former director of mobile at Eircom.

1 My aunt never told us that Gran passed away with no will
2 If it’s safe to do so, could this be the time to spend for Ireland?
3 The $6bn judgment pitting Nigeria against Irish businessmen
4 Government to push through €2bn credit guarantee scheme next week
5 Green Party TD queries ‘usefulness’ of another appeal in €13bn Apple tax case
6 Covid anxiety among domestic holidaymakers could sink this summer
7 Owners of Cork shopping centre sue for €30m after car causes fire
8 Dublin banker sells island off coast of west Cork for €5.5m
9 State’s €2bn loan scheme, Harvey Norman goes west, and Apple tax case
10 Lidl goes to court over Aldi price survey
Real news has value SUBSCRIBE