Owner of Applegreen stations set to announce plan to float 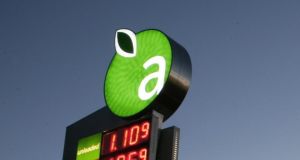 Established in 1992, Applegreen has 98 forecourts in the Republic,

Irish fuel group Petrogas is preparing to press the button on an initial public offering of its Applegreen service station business.

The Irish Times has learned that the company is likely to announce its intention to float next week. This would indicate an IPO of shares in Dublin and London in June.

The board of the company meets next week and is expected to give the green light to an IPO, which has been in preparation for a number of months.

It is understood that the company is well advanced in producing a prospectus for a stock market flotation. Its advisers include Goodbody Stockbrokers in Dublin and UK investment group Shore Capital.

The group has spent the past few months sounding out potential investors and market participants about the move.

Sources have indicated that the company, which is owned by Irish businessmen Bob Echeloning and Joe Barrett, could raise between €50 million and €100 million from its flotation.

Applegreen said: "No decision has been made by Applegreen in respect of an IPO or any other potential capital raising option.”

It is understood that the money would be used to fund ambitious expansion plans for Ireland, Britain and New York, where it has four stations on Long Island.

Established in 1992, Applegreen has 98 forecourts in the Republic, including 12 dealers and eight motorway stations, most of them operated under contract for the National Roads Authority. It is also a franchisee of Burger King, Costa Coffee and Subway.

Applegreen operates as a price disrupter in the market and is believed to be the number two or three fuel provider in Ireland, vying for second place with Maxol behind market leader Topaz, which is controlled by Denis O’Brien.

Latest accounts for Petrogas Group Ltd show it made a pretax profit of just under €14 million on turnover of €394 million in 2013.

The group recently changed the date of its annual return and documents filed with the companies office show that it has satisfied 18 financial charges against the business since December of last year.

Latest accounts for Applegreen Service Areas Ltd, which operates its motorway stations, show it made a pretax profit of €1.7 million from turnover of €86.6 million in 2013. The company is thought to be trading well at present.

Its big expansion opportunity is in Britain, where there are about 8,500 forecourts in the market.

Applegreen has operated there since 2008, gaining traction in the past three years. It currently has 56 UK stations and believes there is an opportunity to add up to 20 additional sites a year.

8 Satisfying the health-conscious is a growing business