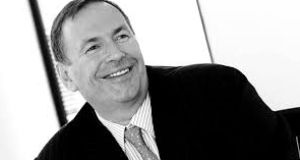 San Leon Energy, the oil and gas explorer led by former stockbroker and telecoms entrepreneur Oisín Fanning, has ended talks on a tie-up with a key partner in Africa, months after two Chinese suitors walked away from the Dublin-based company.

However, shares in San Leon soared as much as 50 per cent as they resumed trading on Monday on the junior London market for the first time since November, when it was forced to suspend trading after confirming talks with Africa’s Midwestern Oil and Gas.

Midwestern has been San Leon’s partner since 2016 in a vehicle that holds an indirect stake in a Nigerian offshore oil field. The talks in recent months centred around Midwestern backing its interest in the asset into San Leon, in what is known as a reverse takeover.

“Whilst the company received an interesting proposal from Midwestern, the board does not feel the structure of the combination reflected the true value of the company’s portfolio,” Mr Fanning, group chief executive, said on Monday. “Accordingly, we have elected to terminate discussions.”

However, company shares were supported on Monday as San Leon said its financial position “is much stronger than when the discussions with Midwestern commenced”.

San Leon holds a 9.72 per cent indirect interest in the so-called OML 18 operations in Nigeria, by way of a complicated deal executed in 2016 when it backed Midwestern in securing a wider interest in the oilfield. The Irish company has received a total of $58.6 million (€48 million) in quarterly payments on $174 million of loan notes it received from Midwestern as part of the original deal.

The company is now sitting on a cash balance of about $13.5 million, after settling a dispute with a Dutch investment firm, called Avobone, in a commercial dispute over a Polish gas field.

Mr Fanning thanked Toscafund, a UK hedge fund led by Martin Hughes which owns 62.3 per cent of the company, for its “patience and support” during the tie-up talks. San Leon had also been involved in abortive takeover discussions with two Chinese suitors last year.

1 ‘I don’t need to do any of this. . .I don’t actually need to work.’
2 Admission of mistake in Oxford vaccine dose raises doubts over reliability
3 Direct sea routes to Europe offer certainty in choppy Brexit waters
4 Only way is up for Stripe as valuation skyrockets
5 Pandemic brings a halt to Zara-owner’s Irish expansion
6 Basic income for all: Has the Covid crisis given us a new economic model?
7 Unilever’s Dutch and British arms merge after 90 years ahead of Brexit
8 There was no vaccine for Anglo: Why the last crisis was different
9 A tale of two pandemics for Smurfit Kappa and Greencore
10 White knights or loan book cannibals – what will happen at Ulster Bank?
Real news has value SUBSCRIBE