Start-up says problems affecting banks, such as bureaucracy, are ‘well present’ in Ireland 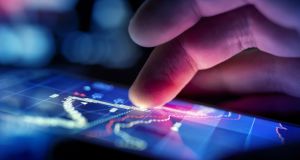 Fintech start-up Number26, which has developed a current account specifically for the smartphone, will be available in Ireland from today.

The Berlin-based company is aiming to create a “borderless banking experience across Europe” and will launch its mobile-first bank account to Irish consumers today.

Signing up for an account takes place online via video chat in just eight minutes, and users can send money to friends via text message or email with just a few clicks.

The account is linked with a MasterCard that can be used worldwide to make purchases or receive cash at ATMs without incurring fees, or foreign transaction fees.

Number26 chief financial officer Maximilian Tayenthal said Ireland was chosen as the latest market to expand into as “the problems affecting banks in Europe, such as bureaucracy, outdated technology and inefficient structures, are well present” in the country.

“The markets we chose to enter now are perfect examples of a bad user experience and overpriced retail banking products,” he said.

Number26 chief executive Valentin Stalf said the expansion brings the total number of countries where Number26 is active to eight, following its initial launch in Germany and Austria earlier this year. The company is also launching in France, Greece, Italy, Slovakia and Spain today.

“Our vision from the start has been to build Europe‘s first bank account for the smartphone…we see traditional banks as having failed to adapt to the demands of the digital generation,” he said.

He added that all funds are protected under the German Deposit Protection Fund.

In just under a year, Number26 has become one of the most successful Berlin start-ups with more than 80,000 clients in Germany and Austria.

In April, the company raised a €10 million Series A round from Paypal founder Peter Thiel’s Valar Ventures, with Daniel S. Aegerter and existing investors Earlybird and Redalpine also participating.