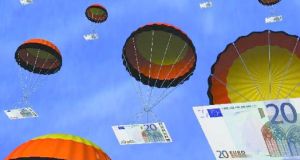 To the rescue? Non-bank finance is aimed at SMEs badly hit by the lack of credit, which is stifling the recovery

Eugene O’Callaghan was appointed director of the National Pensions Reserve Fund in April 2010, just six months before Ireland required a massive European Union/ International Monetary Fund bailout. Back then, the entire team in the National Treasury Management Agency was fire-fighting in the fallout of Ireland’s banking and economic collapse. Billions of taxpayer funds were poured into black holes in Ireland’s banks.

The crash led to a huge retrenchment in Irish banking from 12 players to essentially three, Bank of Ireland, AIB and Ulster Bank. Irish businesses went bust, got taken over or battened down the hatches because of the lack of credit in the market.

Four years on, and O’Callaghan is at the heart of the State’s plans to rebuild the availability of credit to Irish businesses interested in moving from survival to expansion. The origins of this plan date back to September 2011, when Ireland announced proposals to create a Strategic Investment Fund, O’Callaghan said. The NPRF was given a new mandate to create jobs and promote growth in Ireland.

“It was very clear to us that there was a financing gap in the market,” he said. “The two pillar banks were by far the strongest players, but businesses was saying they were not lending enough, while the banks were concerned that businesses were not creditworthy enough. Clearly there was validity to both arguments.”

O’Callaghan said SMEs had been badly hit by the lack of credit, and this was stifling recovery. Setting up a new bank could take two to four years, which was too long for an economy in a deep recession. Non-bank finance, it was decided, was the way to go.

“We thought that a fund structure would be more flexible,” he said.

The NPRF decided it would be a “cornerstone but not controlling” investor in bringing in experienced third-party managers to create funds capable of offering an alternative to the banks for Irish business. It still wanted a commercial return on its money, but fixing Ireland Inc was as important.

In total, the State put €350 million into the three funds, with private investors putting up €500 million. It was not enough to end the credit drought, but it was a start.

BlueBay, he said, was currently working on six deals, two of which had reached legal stage, and four of which were in due diligence.

He said being part of an international company with assets of $68 billion and 400 staff, gave him access to a broad range of sectoral skills to aid his credit fund when making decisions.

He said in terms of transaction size, BlueBay could do deals of between €5 million and €45 million, with average deal size about €20 million. BlueBay he said would not invest in “pure property” or to provide “working capital” to firms.

He said BlueBay was interested in “co-existing” in a structure with more traditional banks. “The product we provide is term debt for up to five years,” he said.

He said BlueBay could be “more expensive” than the banks. “Our fund is not all equity, it is leveraged so we have our own cost of funds to cover,” he explained. But there were upsides to dealing with a fund versus a traditional bank, he said.

“We have flexibility. There is a bespoke nature to what we do. It is not plain vanilla lending, there might be an element of say M&A [merger and acquisition] or it might be event-driven. There could be refinancing . . .” he added.

“If you look at the United States, 80 per cent of loans to corporations come from non-bank sources. The opposite applies to Europe, but that percentage is growing,” he said.

Mr Walsh said he believed his type of fund was not necessarily competing with the banks. “We think we can be complementary too. We can work alongside banks or other funds for businesses,” he said.

Peter Garvey and Jonathan Cosgrave both became directors of the Carlyle Cardinal Ireland (CCI) fund over the summer after working in investment banking overseas.

Their fund combines the international experience of Carlyle, a multibillion investor, with the local expertise of the Cardinal Capital Group, which among other achievements played a key role in attracting private capital to invest more than €1 billion into Bank of Ireland.

Their fund is equity based and it plans to deploy the money over a five-year period, with typical transaction sizes expected to be between €10 million and €30 million.

Apart from eschewing property, Garvey and Cosgrave say the fund is “sector agnostic”.

They pinpoint founder-owner businesses looking to expand, typically but not exclusively, export-led, often in the technology or healthcare spaces, as something the Irish economy needs to foster.

“There’s been a long history of venture capital in Ireland which is not what we’re doing, we’re doing growth capital. There really has been no institutionalised private equity industry in Ireland,” Garvey says.

“What we’re trying to do here, with the backing of the NPRF, is to form the start of that industry.”

The fund made its first investment earlier this year, taking a majority stake in Kildare-based chocolate manufacturer Lily O’Brien’s in a deal worth €15 million to the company. It is close to more deals.

“There’s a real gap in the market between end-of-venture phase and more mature company phase for growth capital,” says Cosgrave.

He says the CCI is an ideal partner for businesses, which are generating sales but want to take it to the next level. “We’re all about relationship building.”

Not everything backed by the NPRF has succeeded. The SME “Turnaround” fund – intended to buy firms at or close to insolvency – will be formally wound down in December after not making an investment.

A €100 million fund backed by the State and managed by Better Capital to invest in turning around Irish small and medium enterprises will be wound down in December after failing to find any company to invest in over two years.

The fund only had a lifespan of two years, but the unexpectedly fast pick-up in the Irish economy rendered it redundant. The fund played a role, however, in pushing banks and company owners to do deals rather than lose control.

It is entirely privately funded, but it could in time seek Irish State or sovereign wealth fund backing.

The fund’s early discussions have been with property developers about building hundreds of new homes in the greater Dublin area, but there is more to it than that.

“Broadhaven is specifically focused on supporting Irish corporates and SMEs. It sees significant potential for Irish businesses to grow and develop, and is keen to support the realisation of this potential through financing appropriate investments,” it said in a statement.

“Broadhaven has been seeded with an initial €200 million commitment and it is envisaged that as opportunities are identified that the commitment of capital will grow significantly. It will be the exclusive platform for Dermot Desmond’s credit investments in Ireland,” it added.

Stewart Doyle, who previously worked with Desmond in his investment company QED Equity, and David Cullen, a corporate banker who formerly worked with Better Capital, have been appointed as its two principles.

Broadhaven is rumoured to be looking at doing big deals, involving not just single companies but also portfolios of corporate loans.

The fund said: “It will be focused on longer term deals; taking a collaborative approach and supporting financing role to businesses across a number of sectors, working alongside the pillar banks.”

Cardinal is also back working with Wilbur Ross to close a €350 million fund called the WLR Cardinal Mezzanine Finance Company.

“We are targeting a structural gap in the real estate market,” Nigel McDermott, a co-founder of Cardinal said last month, “which is clearly identified in government strategy for the construction sector”.

This fund plans to act as a catalyst for deals, as banks remain reluctant to take on speculative development risk.

Despite all this activity, the emergence of Ireland’s non-bank finance sector remains at an embryonic stage.

“There has been a slow recovery in credit growth, which in turn is slowing Irish economic recovery,” Corcoran said.

“Non-bank finance has a significant role to play in helping Irish businesses grow as banks’ legacy underwriting processes and structures fail to keep pace with market development,” he said.

“Corporates and SMEs require tailored funding and risk assessment, this is best delivered by specialist non-bank players providing equity, mezzanine and senior debt by category of size and sector.”

“Culturally, a lot of private companies will not give up equity, so our thinking is that maybe they need a more mezzanine type of finance that takes equity-type risks for equity returns but without taking owners’ shares in their businesses,” he said.

O’Callaghan said as the NPRF moved to become Ireland’s Strategic Investment Fund, it wanted to address other funding gaps in the market.

He said it had invested in private equity funds, for example, to help Irish technology start-ups who needed a different kind of support to debt or equity players. A gap in the market currently being examined, he said, was how to create a nationwide platform for lending to SMEs.

O’Callaghan said the State wanted to support this platform, but was still working out how best to do it.

With €7 billion to invest, however, O’Callaghan said it was important to invest wisely and in a diversified way in the Irish economy to avoid flooding segments of the market. “We don’t want to become the whole market in any area,” he said.

“We are absolutely open to investors who stack up against our investment criteria,” he said. “We want to be engaged in a wide spectrum of investment activities in the Irish economy that will deliver a commercial return and help Ireland’s recovery.”