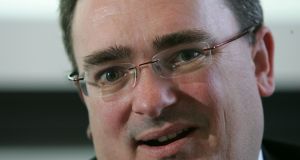 The National Asset Management Agency now expects to make a profit of €1.75 billion by the time it winds down its activities. This is a 75 per cent increase on Nama’s previous guided surplus of €1 billion and emerged in comments made to the Oireachtas Public Accounts Committee today by its chief executive Brendan McDonagh.

Mr McDonagh said the increase in its projected profit followed a detailed review of its loan portfolio in recent weeks.

“I am pleased to say that the profit for the first six months exceeded the full-year profit figure for 2014,” he said, adding that the results for the six months to the end of June would be published by the minister for finance in the coming weeks.

“ Following yesterday’s €1.75 billion redemption of senior bonds, Nama has redeemed a total of €4.5 billion this year and €21.1 billion since inception, which represents 70per cent of the €30.2 billion originally issued.”

He said Nama was well placed to meet its target of redeeming 80 per cent of senior debt by the end of 2016 and 100pc by 2018, two years ahead of its original schedule.

On Tuesday, Nama completed its biggest loan sale to date with the disposal of Project Jewel to UK property company Hammerson and German insurer Allianz for €1.85 billion. These loans were connected with Irish property developer Joe O’Reilly.

Mr McDonagh also provided the committee with an update on the 14 sites in the Dublin Docklands’ Strategic Development Zone in which Nama has an interest.

“Nama has been involved, working with its joint venture partners and receivers, in obtaining and submitting planning applications for over 2 million of the 3.8 million sq feet of commercial office space in the SDZ in the past 15 months,” he said.

“ Construction has started on one site - 8 Hanover Quay. This development has already been pre-let, providing certainty over the cashflow it will generate. Planning permission has been granted for three sites, including Boland’s Mill, which will deliver 400,000 sq ft of office, retail, residential and cultural accommodation.”

Planning applications have been submitted for a further five sites, including in the Point Village and one on 72-80 North Wall Quay, which is being developed by Oxley Holdings of Singapore, he added.

Of the remaining five sites, planning applications will be lodged in late 2015 and early 2016.

Mr McDonagh responded to some negative comments about the agency made to the Oireachtas Banking Inquiry by certain property developers.

While the inquiry advised Nama that it must not make any public comment on evidence given to it by specific witnesses, Nama has written to the committee and provided a “detailed and comprehensive rebuttal” of claims made by certain developers.

“It is possible the joint committee may approve publication of our detailed rebuttal and indeed we would be keen that they put the facts on the public record,” Mr McDonagh said.

“It should be clear to everyone at his stage that Nama debtors do not consider Nama to be a cosy bailout. We make no apology for being rigorous, professional and fair.”