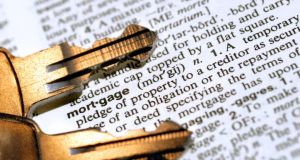 Some €511 million worth of new mortgages was approved in each of the three months to the end of December.

The number of mortgage approvals in Ireland rose by 43.6 per cent last year to 26,576, according to latest figures from the Banking & Payments Federation Ireland.

There were 2,780 home loan approvals on average in each of the three months to the end of December 2014. This represented a rise of 57.8 per cent when compared with the same period in 2013 and 1 per cent on the three-month moving average to the end of November.

This would suggest there was only a modest uplift in approvals during the closing weeks of last year in spite of new rules on tighter loan-to-value ratios, as proposed by the Central Bank of Ireland in October, being on the horizon.

House purchases accounted for 2,564 of the mortgage approvals each month in the final quarter, with 216 remortgages or top-ups.

Some €511 million worth of new mortgages was approved in each of the three months to the end of December – the highest level since the lobby group began compiling this data in 2011.

This data measures mortgage approvals by lenders. Statistics for the number of home loan drawdowns by customers in the final quarter are not yet available. The approvals data suggests banks were more willing to lend to customers last year and demand has improved as the economy recovers.

The Central Bank’s planned new rules on mortgages, which will shortly come into force, would also have fed the increase in approvals.