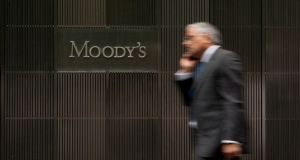 Moody’s changed its outlook for the Irish banking system to positive from stable on Tuesday, on the back of strong expected growth for the Irish economy and the banks’ successful restructuring plans. However, the rating agency did caution that asset quality still poses “significant challenges” and will continue to impede a return to a full normalisation of the banking sector.

“ The positive outlook reflects the rating agency’s expectation that banks’ credit fundamentals will continue to improve over the next 12-18 months, underpinned by the favourable operating environment and successful execution of banks’ restructuring plans,” Moody’s said in a note.

Dany Castiglione, assistant vice president with Moodys, pointed to an increase in Ireland’s real GDP of 6.2 per cent in 2015 and 4 per cent in 2016, substantially outperforming European peers.

“Against this favourable backdrop, we expect to see a material strengthening of banks’ credit fundamentals, although these improvements come from a low base,” he said

However, the major cloud still on the horizon is the level of problems in the banks’ mortgage books.

“The share of mortgage loans in negative equity is still significant, with roughly 40 per cent of residential mortgages with a loan-to-value higher than 100 per cent at end-Q12015, long-term arrears on mortgage loans are increasing, representing about 82 per cent of total arrear balance at June 2015 against 71 per cent of June 2014, and the level of foreclosures has remained at a low level, not allowing banks to realise collateral on residential lending and leaving non-performing assets on their balance sheet for a longer period of time” Mr. Castiglione said, adding that these factors will “continue to weigh down the ratings of domestic banks for the next two to three years.”